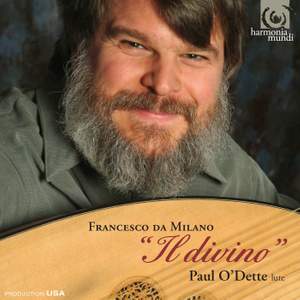 O’Dette captures this music’s improvisatory quality with effortless finger work and fluent ornamentation. Above all, he reveals the underlying rhetoric of this vocally inspired music… the lucid... — BBC Music Magazine, August 2013 More…

Francesco da Milano, 'Il divino', was celebrated as the pre-eminent composer of lute music in Renaissance Italy. He was widely published in his lifetime and remained popular across Europe into the 17th century. In this generous selection of his favourite works by the master, Paul O'Dette has grouped these elegant and refined compositions into 'proto' suites, each consisting of a ricercar, a fantasia, and one or more intabulations of vocal 'hits' of the day.

Paul O’Dette has been called "the clearest case of genius ever to touch his instrument" by the Toronto Globe and Mail. Though perhaps best known for his recitals and recordings of virtuoso solo lute music, he maintains an active international career as a continuo player, and conducts baroque operas and orchestral programmes throughout the United States and Europe.

In addition to his activities as a lute player, Paul O’Dette is Artistic Director of the Boston Early Music Festival and has served as Director of Early Music at the Eastman School of Music since 1976.

Paul O’Dette has published numerous articles on issues of historical performance practice and co-authored the Dowland entry in the New Grove Dictionary of Music and Musicians.

The artist has made more than 120 recordings, several of which have been nominated for a Gramophone Award and five for the Grammy® Awards. We continue to lobby for the reissue of his complete Dowland edition which was Building a Library Choice. His next, eagerly awaited, release for harmonia mundi will be a brand new Dowland album.

O’Dette captures this music’s improvisatory quality with effortless finger work and fluent ornamentation. Above all, he reveals the underlying rhetoric of this vocally inspired music… the lucid recording enhances O’Dette’s silky sound – worthy of Il divino himself.

There are many favourites, including a rollicking Fantasia… a surprising freedom of rhythm, and Ricercar 8 rolls on gently as if in a dream… a variety of contrasting musical ideas are developed… This excellent CD ends with two fantasias… played with O’Dette’s characteristic dexterity panache and cleanness of tone.

a truly ravishing programme in which Francesco's masterly control of drama through register, texture and ornament is fully brought out by O'Dette's highly expressive, cantabile and colouristic playing.