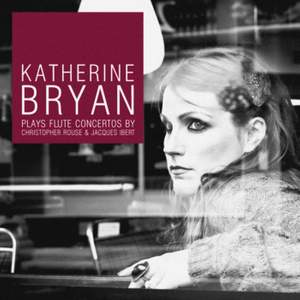 Bryan certainly has complete mastery of the [Rouse's] technical and expressive demands, as she does in Ibert's Concerto of 1933...Her playing of Debussy's Syrinx, the ne plus ultra of the solo... — Gramophone Magazine, August 2013 More…

Young flautist Katherine Bryan is rapidly establishing her place as one of Britain’s bright musical stars of the future.

For her second recording on Linn, the in-demand concerto soloist performs a selection of 20th century concertos plus Debussy’s Syrinx and Frank Martin’s Ballade.

The Flute Concerto by American composer Christopher Rouse is among his most successful and widely performed works since its debut in 1994. Rouse’s concerto calls for astonishing pyrotechnics for both the flute and the orchestra; Katherine is able to showcase the sheer quality of her technique and her playing.

French composer Jacques Ibert’s Concerto for Flute and Orchestra is one of the best-loved and most frequently performed concertos in the flute repertoire. Full of humour, virtuosity and intense technical challenges for the soloist, it is characteristic of Ibert’s eclectic, versatile compositional style.

Despite being only a little over three minutes long, Debussy’s Syrinx has achieved iconic status and is regarded as an essential piece in any serious flautist’s repertoire.

Martin’s Ballade features wide harmonic leaps and tests the full range of the instrument, not least with a memorable section for the low register which sees Katherine relish the challenge.

Katherine Bryan is a rising star having appearing as concerto soloist with leading orchestras worldwide, as well as being principal flautist with the RSNO.

Katherine has appeared at major international festivals as both concerto soloist and recitalist. She has given live broadcasts on Classic FM, BBC Radio 3 and BBC television.

Katherine was a prize-winner at the Royal Overseas League Music Competition in London, the Young Concert Artists International Competition in New York and was a finalist in the BBC Young Musician of the Year for three consecutive competitions. She was also awarded the Julius Isserlis Scholarship by the Royal Philharmonic Society.

Bryan certainly has complete mastery of the [Rouse's] technical and expressive demands, as she does in Ibert's Concerto of 1933...Her playing of Debussy's Syrinx, the ne plus ultra of the solo flute repertoire, is exquisitely eloquent.