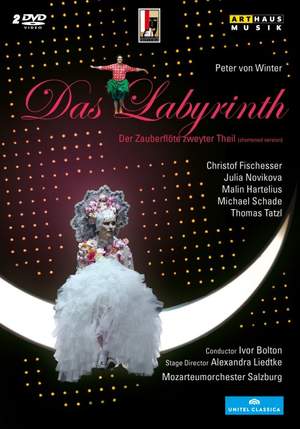 Here's a curiosity!...Muhlemann is a pert and confident Papagena, and the voices of the Queen's three Ladies entwine with secutive suppleness...The colours are fairy-tale bright...and there has... — International Record Review, July/August 2013 More…

We are all familiar with Mozart’s Die Zauberflöte (The Magic Flute) to the libretto by Emanuel Schikaneder (1751–1812). It is not widely known however that Schikaneder wrote a sequel to The Magic Flute, which his friend Peter von Winter (1754–1825) set to music.

2012 the Salzburg Festival presented this operatic rarity in the form of a glittering fairy-tale opera full of magical events.

The happy couple Pamina and Tamino have to master trials and tribulations, like the separation by Sarastro in order to wander through an underground labyrinth and the continuing machinations of the Queen of the Night. Well-loved Papageno – who reunites with his parents and finally marries his Papagena – helps Tamino and Pamina in their efforts to reach a happy ending.

The Salzburg production by young director Alexandra Liedtke features a number of star soloists with Christof Fischesser as Sarastro and Malin Hartelius and Michael Schade as the lovers Pamina and Tamino. Newcomer Thomas Tatzl gives a charming Papageno, who leads us through the story and is always good for an adventure.

Ivor Bolton conducts his Salzburg Mozarteum Orchestra energetically, smoothly and elegantly, bringing out the best in Peter von Winter’s charming score with its cleverly interwoven allusions to Mozart. His compositions partly marked the transition between Mozart and Carl Maria von Weber in the development in German opera.

Here's a curiosity!...Muhlemann is a pert and confident Papagena, and the voices of the Queen's three Ladies entwine with secutive suppleness...The colours are fairy-tale bright...and there has been (fortunately) no serious directorial interference with the creators' intentions, so it's all got plenty of naive charm

Liedtke’s staging is simple and fun and minimises the work’s longueurs. Ivor Bolton conducts with a good balance of wit and gravity and the cast is excellent, the vocal ranges echoing Mozart’s. Malin Hartelius and Michael Schade are elegant as Pamina and Tamino.