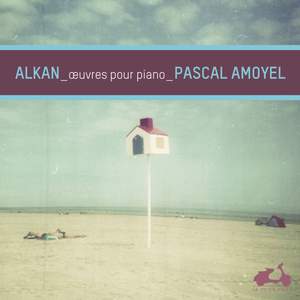 One of the great forgotten figures in the history of music, a man admired by Liszt, nicknamed "the Berlioz of the piano" by Hans von Bülow, is undoubtedly Charles-Valentin Alkan, the best-kept secret of French Romanticism, a solitary and impassioned soul.

He was an exceptionally gifted virtuoso pianist; a demanding and inventive composer; a tormented artist who produced a kaleidoscopic and passionate body of work. Alkan is fascinating because of the mystery that still shrouds his life and his work when, after a spectacular early career, he withdrew from society, taking refuge in his inner world.

"I wanted to showcase all the composer's facets, in a multifaceted way. The 'Grande Sonate Les quatre âges', is a colossal, gigantic work, a sort of romantic ideal of the sonata, which undoubtedly influenced Liszt's. As a counterpart to this great work, I selected shorter pieces, like the 'Esquisses', which show a composer who could capture a moment in time. And then I also selected a number of pieces that are both visionary and 'anchored' in their era. The 'Barcarolle' is reminiscent of Mendelssohn and prefigures Satie, as with 'les Soupirs' for Scriabin and even Debussy. While the 'Nocturne' is similar to Chopin's opus 32, 'Les Cloches' and the 'Prélude La chanson de la folle au bord de la mer' illustrate Alkan's fascination with realism, everyday life, the strange and the extraordinary." Pascal Amoyel

he gives us a lightweight rather than necessarily overwhelming experience

Pascal opens with a poised, sensitive account of the heart-melting Nocturne Op 22 … At the centre of this recital is one of Alkan’s large-scale masterpieces, the Grande Sonate ‘Les Quatres Ages’ … an extraordinary musical journey – well recorded, incidently – and played with commendable assurance and understanding

There is some remarkably impressive music in [the Grande Sonate], of which Amoyel has the full measure, both intellectually and technically, and for this listener he has made a much more convincing case for it as a whole than some previous interpreters who have come my way...I have really been bowled over by the music here, and Amoyel's performance of it.