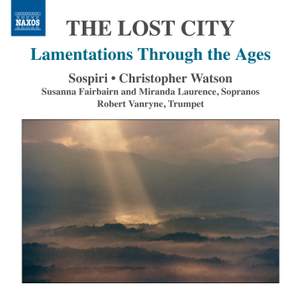 Offer, The Lost City: Lamentations Through the Ages

McDowall, C: The Lord is Good

The Lamentations of Jeremiah may be unremittingly sad, but they have had a deep resonance for composers throughout the ages. This is a collection that reflects that diversity – from John Mundy’s setting, which highlights the grave concern over schisms in the Catholic Church of the sixteenth century, through to Rudolph Mauersberger’s motet, which mourns the destruction of the city of Dresden in 1945. Two new pieces were commissioned especially for this project, and are recorded here for the first time: John Duggan’s haunting set of three Lamentations for choir, trumpet and solo soprano; and Cecilia McDowall’s exotic and powerful The Lord is Good, which was shortlisted for a BASCA award in 2012.

Sospiri’s CD Requiem on the Gift for Music label was warmly received, the Oxford Times reviewer “captivated by these pieces when I heard them in performance, and they are just as mesmerising on disc.” The Lost City continues Sospiri’s winning combination of repertoire from early music through to the present day, creating their own meditative cutting edge by appealing to audiences both contemporary and conservative, secular and spiritual.

The centrepiece is the triptych by John Duggan...Susanna Fairbairn and Robert Vanryne duet sweetly in the first 'panel'...Another high point is John Mundy's De Lamentatione, reconstructed by Francis Steele and full of glorious harmonic clashes. Christopher Watson and Sospiri do it proud.