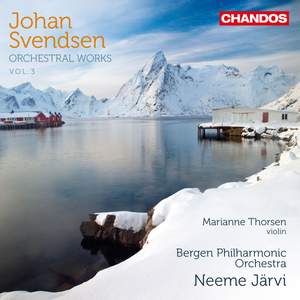 Järvi and his Bergen players sound most happy together, playing with a fluency suggestive of more joint live performances than they could pssobly have had. The engineering supports them at every... — Gramophone Magazine, July 2013 More…

Svendsen: Concerto for violin and orchestra in A major, Op. 6

Neeme Järvi brings us Vol. 3 in his survey of orchestral works by the Norwegian composer Johan Svendsen. This series has received great reviews for its idiomatic performances by the Bergen Philharmonic Orchestra and the violinist Marianne Thorsen. Gramophone wrote of Vol. 2: ‘Järvi and his Norwegian forces are on scintillating form… to be treasured.’

This volume takes us to the second half of the 1860s, when Svendsen was in his twenties and had just graduated from the Leipzig Conservatory. At this time the composer found himself captivated by new trends in European music, and in the orchestration of Symphony No. 1 he went in the French direction with a sound full of contrasts. Especially the woodwinds, often placed in their high registers, make a sparkling character in this work. The symphony is dedicated to Carl F. Leche, the Swedish-Norwegian consul in Lübeck ‘in deepest gratitude and reverence’. Back in 1863 Svendsen had been stranded in that city without the funds necessary for getting to Leipzig to enter the conservatory. He went to Leche to ask for economic support to go home to Norway, but the consul saw his potential and instead succeeded in getting him an all-important scholarship from the Swedish-Norwegian King.

Also on this disc are Two Icelandic Melodies, on tunes that were likely taken down by Svendsen on a journey to Iceland and the Faroe Islands in the summer of 1867, and the Violin Concerto (1870), which Svendsen himself saw as being new and original, several critics at the time agreeing with him. In this piece, the composer’s focus is on the contrast in timbre between soloist and orchestra, rather than the soloist’s virtuosic battle against it. His model for the work may well have been Berlioz’s Harold en Italie for orchestra and viola.

In 1874 Svendsen had settled down with his family in Christiania. Norwegian Artists’ Carnival was composed for the yearly carnival in Christiania’s Artists’ Association, the intention being to reconcile the cold North and the warm-blooded South. To that end, the work consists of three main themes: a Norwegian folk tune, an Italian folk tune, and a popular Norwegian Wedding Dance. It is one of Svendsen’s most acclaimed works, and one that remains a part of the standard orchestral repertoire in Scandinavia.

Järvi and his Bergen players sound most happy together, playing with a fluency suggestive of more joint live performances than they could pssobly have had. The engineering supports them at every turn.

For lighter but colourful fare, volume 1 has most to offer, and by way of bonus includes Svendsen's best-known work, the lilting violin Romanze op.26