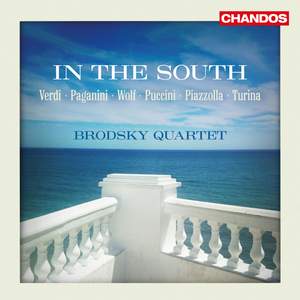 Offer, In the South: Brodsky Quartet

this is an enjoyable disc of off-the-beaten-track music for string quartet...The Brodsky Quartet clearly relish the chance to do something less heavyweight than their usual repertoire — BBC Music Magazine, October 2013, More…

The Brodsky Quartet here turns to the sunshine, bright colours, and deep-set passions of the South, performing Latin-inspired music for string quartet by composers who all possessed a strong connection to the ‘South’, whether it was the Mediterranean or South America.

Paganini’s Capricci Nos 6 and 24 need no introduction. They are among the most published and reviewed virtuoso pieces ever composed, and have been frequently arranged over the last two hundred years, with each new reading allowing us to discover Paganini’s art afresh. This version has been arranged by the violinist Paul Cassidy, a long-standing member of the Brodsky Quartet.

We have the chance to hear chamber works by two further Italian composers, who would always be known primarily for their massive achievements in opera. In fact, the sad melodies of Puccini’s Crisantemi would later be used in the tragic fourth act of the opera Manon Lescaut. The Quartetto in E minor was the only string quartet Verdi ever wrote, and he himself insisted on presenting it as a mere trifle, stating that it was composed ‘in idle moments’ before the premiere of Aida. This Quartet divided opinion. Whereas some reviewers recognised the technical difficulties of the work, others thought Verdi’s Italian temperament inappropriate to instrumental music.

The inspiration to La oración del torero (The Toreador’s Prayer) came to Turina during a Spanish bullfight, during which he watched as a bullfighter received the prayerful Sacrament of Holy Unction, while all around a feverish excitement over the forthcoming fight was overtaking the crowd. The work itself displays elements of French impressionism, combined with strong evocations from the Spanish bullfighting arena.

Four, for Tango, written in 1988 for the Kronos Quartet, is a prime example of Piazzolla’s own style of ‘Nuevo Tango’; this new form of tango became popular around the world, and was generated from combining Argentine folklore with so-called ‘art music’. Also on this disc is Hugo Wolf’s ‘Italian’ Serenade, a work equally full of captivating rhythms, harmonic warmth, and dancing themes.

this is an enjoyable disc of off-the-beaten-track music for string quartet...The Brodsky Quartet clearly relish the chance to do something less heavyweight than their usual repertoire

Not unexpectedly, the performances by the Brodsky Quartet are full of spontaneously imaginative insights and equal to all the diverse demands of these six composers.

[in the Turina] vibrant Iberian colours make an unalloyed delight of the Brodsky's playing...[Rowland] leads a performance [of the Verdi] that stings with the shock of extreme dynamic contrasts and thrills with moments of rhythmic exactness...this is a very refreshing collection.

These six works are by composers not associated with string quartets. The mood is Italianate, but not exclusively so...Paul Cassidy, has arranged – winningly – two solo violin Caprices by Paganini for quartet, here in a premiere recording...Verdi's Quartetto has a lyrical if operatic simplicity and energy. All evoke pleasurable heat and light.