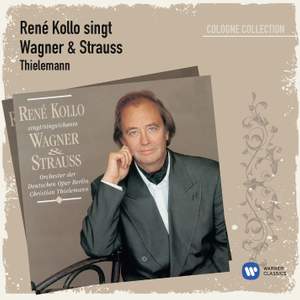 Before Jonas Kaufmann there was Rene Kollo. Try the gravitas and limitless breath-control of his 'Dünkt dich das?' from Tristan. — BBC Music Magazine, July 2013, 5 out of 5 stars

Expressiveness and intelligent acting: For Herbert von Karajan he was the ideal Wagner singer. But René Kollo didn’t only shine as a heroic tenor. He also possessed immense versatility, reaching a large audience both as an expressive actor on the opera stage, and with his concert and television appearances and in his roles in operetta films. And for all these different activities, he never forsook his credibility as a “serious” singer. This Electrola recital with Kollo features Christian Thielemann on the rostrum – still at the outset of his career in 1992, but in the meantime one of the leading conductors of Wagner and Strauss.

Before Jonas Kaufmann there was Rene Kollo. Try the gravitas and limitless breath-control of his 'Dünkt dich das?' from Tristan.