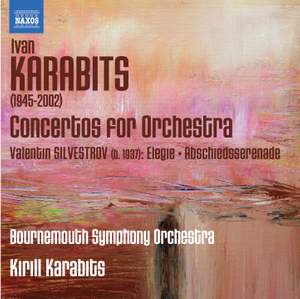 Karabits senior's many full-orchestral thrashes are as turgid and over-scored as those in the more recent works of an admired colleague, Rodion Shchedrin...No reservations at all, though, about... — BBC Music Magazine, May 2013, More…

Karabits: Concerto for Orchestra No. 2

Following Ukraine’s independence in 1991, Ivan Karabits became the country’s leading musical figure. An inspirational composer, artistic director and teacher, he absorbed into his own music three particular traditions: Mahler, Shostakovich, and the folk-music of his native country. The colourful, virtuosic and at times theatrical Concertos for Orchestra reflect the influence of his friend and mentor, Rodion Shchedrin. Following Karabits’ untimely death, his compatriot Valentin Silvestrov composed two heartfelt memorials. The first of these, Elegie, makes use of Karabits’ own unfinished pencil sketches which sit side by side with Silvestrov’s own ideas as the piece progresses, almost as if it were a dialogue between the two friends about their work.

Karabits senior's many full-orchestral thrashes are as turgid and over-scored as those in the more recent works of an admired colleague, Rodion Shchedrin...No reservations at all, though, about the playing of the excellent Bournemouth Symphony Orchestra.

the music is colourful and falls easily on the ear...Kirill Karabits's feeling for the music is clearly strong and he carries the Bournemouth players enthusiastically in these performances.

[Karabits's music] is so interesting, rich with invention. While it has its serious moments it is also often funny and full of quirky elements...these are really exciting and barnstorming works that would thrill any but the most jaded of audiences...This is an absolutely brilliant disc that bowled me over and I can’t wait to discover more music by these two giants of Ukrainian classical music.

much of the music seems designed for orchestral show and there are strikingly surreal moments in all three works – the inclusion of textures and colours, like the appearance of a harpsichord in the opening section of the second concerto – that seem deliberately disorientating.