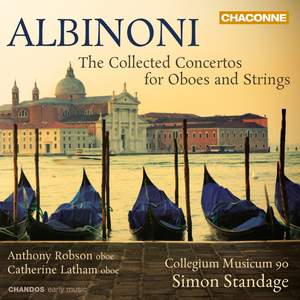 Albinoni: Concerto for Strings in G major, Op. 7 No. 4

Albinoni: Concerto for 5 instruments in A major, Op. 7 No. 7

Albinoni: Concerto for 5 instruments in D major, Op. 7 No. 8

Albinoni: Concerto Op. 9 No. 2 for oboe & strings in D minor

Albinoni: Concerto for 2 oboes, strings and continuo in G major, Op. 9 No. 6

Albinoni: Concerto for 2 oboes, strings and continuo in D major, Op. 9 No. 12

Dating back to the second decade of the eighteenth century, Albinoni’s twenty-four Concerti a cinque, Opp. 7 and 9 – eight for a single oboe, eight for two oboes, and eight for strings alone – were the earliest such works by an Italian composer to be published. Here the oboe functions, in its relationship with the strings, almost like a singer. The fact that the composer entitled these works ‘Concerti con oboe’ (with oboe), not ‘per oboe’ (for oboe), signifies that the strings (and in particular the first violin) play a role nearly as important as the wind instrument. An interesting contrast between the opus numbers can be found within the double oboe concerto form, with those belonging to Op. 7 boasting an almost Vivaldian vigour and much variety in texture, while the later works are consistently larger in scale, and more regular in form. Among string concertos, Op. 9 No. 7 is the most elaborate concerto for solo violin by Albinoni, and Op. 9 No. 10 the last example of its type in the composer’s œuvre.

Founded by Simon Standage and the late Richard Hickox, Collegium Musicum 90 has a well-established reputation for its performances of baroque and classical music using period instruments, its repertoire ranging from chamber pieces to large-scale works for choir and orchestra. Under its exclusive contract with Chandos Records, Collegium Musicum 90 has made more than sixty critically acclaimed CDs. The ensemble is joined here by the two oboe soloists Catherine Latham and Anthony Robson. Internationally recognised as a leader in the field of performance on historical oboes, Robson is Principal with both Collegium Musicum 90 and the Orchestra of the Age of Enlightenment.