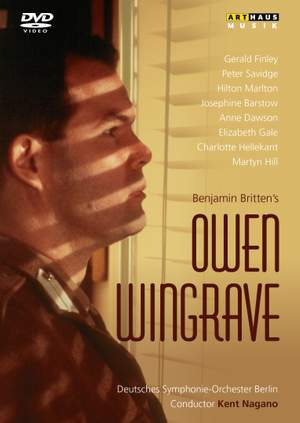 Finley and his top-drawer British actor/singer colleagues tread an impeccably drawn line beween emotion and excess. Nagano and his German players might have been a strange choice but they are... — Gramophone Magazine, June 2013 More…

When Britten started to work on Owen Wingrave he conceived the opera both for performance on stage and for TV production.

In fact the first TV production of Owen Wingrave was broadcast in 1971, two years before the staged premiere at Covent Garden. This 2001 production, made for Channel 4 television, intriguingly tells the drama of Owen, who refuses to follow a military career like his ancestors. The story, in which pacifism makes up the main theme, was written by Henry James, and the libretto adapted by Myfanwy Piper. The Canadian baritone Gerald Finley stars as Owen with Peter Savidge, Hilton Marlton and Josephine Barstow at his side.

The production was directed by the award winning TV director Margaret Williams. Highly acclaimed conductor Kent Nagano is the musical director of this performance featuring the Deutsches Symphonie-Orchester Berlin.

“The cast is outstanding: Gerald Finley as Owen, the formidable Dame Josephine Barstow as his terrifying aunt and Martyn Hill as his militaristic grandfather. Who says singers can‘t act? One of the best opera films ever.” The Sunday Times

Finley and his top-drawer British actor/singer colleagues tread an impeccably drawn line beween emotion and excess. Nagano and his German players might have been a strange choice but they are never less than efficient.

Nagano’s direction of the Berlin orchestra is clean and precise, and the singing is extremely effective, too. In the title role Gerald Finley sounds splendid but looks uncomfortable...The show is comprehensively stolen by Josephine Barstow, however, who chews up the scenery as Owen’s harpy of an aunt.

The unsympathetic fiancee, Kate...seems a more complex character than before, well taken by Charlotte Hellekant, and the gallery of disagreeable family-members is strongly cast too