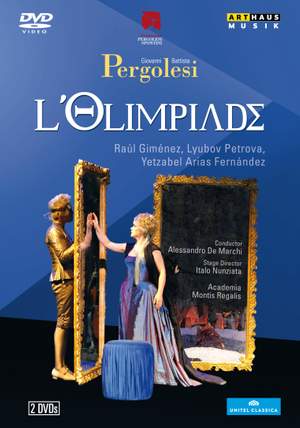 With Olimpiade the famous poet Metastasio created one of the most popular librettos of the 18th century. It was set to music by over 60 baroque and classical composers including Vivaldi, Caldara, Hasse, Cimarosa and Donizetti. Pergolesi’s composition from 1735 was one of the earliest adaptations.

In the 2011 Jesi production of L’Olimpiade a large part of the auditorium is taken up by a cross-shaped platform. This is where the characters of the drama are introduced, where they elaborate their plans and express their innermost feelings, their sufferings and hopes, while the supreme ritual of the ancient Greek world, the Olympic Games, is celebrated on a distant stage: that event upon which their lives – and all prospects of happiness or otherwise – depend.

L’Olimpiade stars a superb cast of young singers, especially to be named are the ladies in the leading roles – Lyubov Petrova, Yetzabel Arias Fernández, Jennifer Rivera and Sofi a Soloviy – as well as famous Raúl Giménez in the role of King Clistene.

“It is hard to imagine a happier or more enthralling presentation of [Pergolesi’s] ‘Olimpiade’ ... more natural in the theater than one would think possible.” La Stampa

an astonishingly vital, stirring experience...thanks to the inspired advocacy of Alessandro de Marchi and his superb Accademia Montis Regalis, one quickly appreciates the composer's widened dramatic range and command of an Italianate gift for lyrical characterisation.

The music is accomplished, as is the playing of it by the Academia Montis Regalis, which is superb in its rendition under Alessandro De Marchi...Jennifer Rivera’s compact tone and outstanding technique are very exciting indeed. And good to see veteran Raúl Giménez give a lesson in longevity of technique.