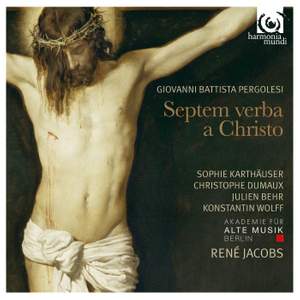 Now attributed to Pergolesi on the basis of recent research, the ‘Seven Words of Christ’ has been regarded as ‘one of the most heartfelt works of art, full of profound tenderness and an all-conquering sense of beauty’ [Hermann Scherchen, on its discovery in 1930]. However, his judgment has remained unheeded and only the discovery of two more manuscripts in the abbeys of Kremsmünster and Aldersbach, by the musicologist Reinhard Fehling, prompted the firm of Breitkopf & Härtel to publish a critical edition.

In principle this recording follows the Breitkopf edition. Its editor very kindly gave René Jacobs facsimiles, not only the individual parts from Kremsmünster (his principal source), but also those from Metten and Zurich. Pergolesi’s work, probably composed between 1730 and the year of his early death, 1736, was intended for an extra-liturgical devotion on Good Friday. This major discovery of the Neapolitan Baroque was given its concert premiere at the Beaune Festival in July 2012, a few days before this world premiere recording.

Rene Jacobs has received many distinctions from music critics including Record of the Year from Gramophone for Mozart’s ‘Le nozze di Figaro’ in 2004. Classica magazine voted him ‘Artist of the year 2009’ for his recordings of Telemann’s ‘Brockes-Passion’, Mozart’s ‘Idomeneo’, and Haydn’s ‘Die Schöpfung’.

Long a professor at the Schola Cantorum Basiliensis, René Jacobs has maintained a privileged relationship with this institution where he has trained many singers who now appear with him in the leading international venues.

Jacobs draws a mood of passionate concentration, throwing into high relief that work's quasi-operatic drama...There's some persuasive playing, too, by the Berlin ensemble: taut strings, magisterial brass and stylish continuo all bring this haunting work back to life.

the work is beautiful, and its deeply spiritual loveliness has been realised in a fine period performance. Certainly, it won't be languishing in dusty libraries any more. It is, in its own way, just as sublime as the Stabat Mater, and René Jacobs and his musicians have given it a comprehensive rehabilitation.

there is no doubting the enthusiasm of Jacobs...Fascinating stuff, whoever composed it.

Jacobs clearly believes in this work completely. He and his musicians give it a performance of such heartfelt intensity that you sense their affection and respect for it from the outset...the overwhelming feeling is of affection and care as he takes upon himself the responsibility for unveiling this work to the modern world...The singers are also excellent...Invest with confidence.

well worth exploring…[it] should expand our repertoire of Passiontide music into new directions. Invest with confidence.

this hybrid cycle of seven early-18th-century cantatas based on the Seven Last Words is deeply impressive...The mood ranges wide, from fiery, coloratura-laden anger to a touching lyricism.

the music is both constantly surprising and often profoundly eloquent; Jacobs's soloists, as well as the instrumentalists of the Berlin orchestra, project that sense of devotional wonder without a trace of self-conscious piety.