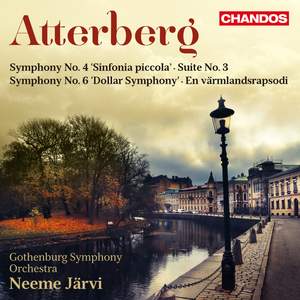 Back in 2010, Neeme Järvi commenced his Scandinavian project with the Bergen Philharmonic Orchestra, offering up idiomatic performances of orchestral works by two of Norway’s best-loved composers, Johan Halvorsen and Johan Svendsen. Similar in its approach, this new survey turns to Norway’s neighbouring country, with Järvi conducting the Gothenburg Symphony Orchestra in orchestral works by the Swedish composer, Kurt Atterberg.

Atterberg was one of Sweden’s leading composers of the twentieth century, not to mention a conductor, critic, and founder of The Society of Swedish Composers. Largely self-taught, he developed a compositional style which initially owed much to Brahms and Alfvén, although he was more inclined to paint vivid, loosely structured melodic pictures than to adhere to the traditional classical frameworks. Tuneful, accessible, and fairly folkloristic too, Atterberg’s music became more impressionistic by World War I, and it was around this time that he composed most of the works on this disc.

Symphony No. 4 (1918) was composed in friendly competition with a Swedish colleague, Natanael Berg. They had decided that each should compose a work lasting no longer than twenty minutes, and that a bass tuba should be heard in ‘splendid isolation’ somewhere in it. The resulting piece by Atterberg is full of humour and wit, the language open and simple, and strongly inspired by Swedish folk music.

That same year, Atterberg was asked to write music to Maurice Maeterlinck’s play Sœur Béatrice. For the theatre performance itself, he only had three musicians at his disposal, playing violin, viola, and harmonium. A few years later, however, he reworked the harmonium part of extracts from the incidental music for string orchestra, retaining the solo violin and viola, after which this became known at Suite No. 3, a work filled with beauty and passion, and ultimately one of his most frequently performed pieces.

For many years, the only work by Atterberg that circulated widely outside Sweden, in performance, recording, and notoriety, was his Symphony No. 6, for which in 1928 he won a prize awarded by the Columbia Gramophone Company for a work in the spirit of Schubert, who had died 100 years earlier.

En värmlandsrapsodi (1933) was written to mark the seventy-fifth birthday of the 1909 Nobel Prize laureate in literature, Selma Lagerlöf, and it was performed for the first time in a live broadcast by Swedish Radio. Upon hearing the piece, Lagerlöf wrote to Atterberg: ‘It was a solemn moment when we heard the rhapsody streaming from the radio. We listened with great joy and excitement and were made happy by the echo of melodies from Värmland. May the piece live and win the people’s ear.’

Järvi's is the truest and most opulent [Sixth Symphony]...The couplings are equally beguiling...Järvi's accounts of these at least match their rivals and together comprise an excellent start to the series.

The Gothenburg Symphony Orchestra under Neeme Järvi seems to give a perfect account of these works. I do not know these pieces in any other versions, but the performance here is ravishing and totally persuasive...Kurt Atterberg’s music is something of a revelation...an attractive mix that is always well-wrought, sometimes downright moving and always interesting. The only ‘negative’ is that the music lack[s] challenge.