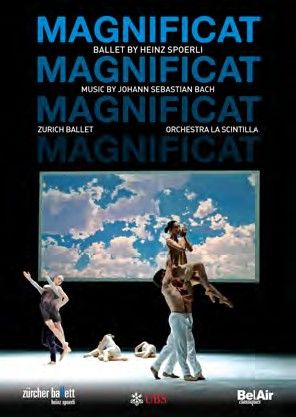 musically, things are very strong indeed...The sounds [Minkowski] gets from La Scintilla are bouncy, rhythmic and lithe, as befits the context of the performance... This disc is well worth a... — MusicWeb International, 3rd July 2013 More…

The starting point and destination of Heinz Spoerli's new ballet is the 'Magnificat' by Johann Sebastian Bach.

From the beginning of the 'Allemande' movement of the Partita in A minor for solo flute, through the joy of 'Brandenburg Concerto' No. 3, this is the question of faith, which sparked Heinz Spoerli's interest in this piece.

This is an important aspect for Heinz Spoerli in his discourse with the text of the 'Magnificat', in which his deep respect for all religions, or rather every faith, is not about the worship of a certain creator-figure, but more about the conditions and prerequisites of this for the expression of a profound devoutness, which also involves rejection, exlusion, uncertainty and separation.

The Orchestra La Scintilla is conducted by Marc Minkowski. In 1996 it was founded as independent ensemble by specialist musicians of the Zurich Opera Orchestra and soon obtained an excellent reputation. The spark that ignited the enthusiasm for new 'old music' gave its name to the ensemble: "La Scintilla" – The Spark. Performances with eminent authorities in the field such as Nikolaus Harnoncourt, William Christie, Mark Minkowski, Reinhard Goebel and Giuliano Carmignola were so successful that the Opera House Zürich has this ensemble perform all baroque operas and nearly all operas of the classical period.

"La Scintilla" gives concerts with well-known soloists, instrumentalists and singers and has toured North America and Europe with Cecilia Bartoli.

musically, things are very strong indeed...The sounds [Minkowski] gets from La Scintilla are bouncy, rhythmic and lithe, as befits the context of the performance... This disc is well worth a look, not just for dance enthusiasts but also for Bach fans who fancy something a little different.