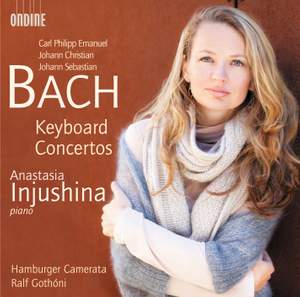 the Hamburg Camerata string are in sparkling form. Anastasia Injushina's articulation is admirably versatile, though ornaments tend to accent, rather than simply decorate, the slow movement's... — BBC Music Magazine, July 2013, 4 out of 5 stars More…

This new release features the most beautiful and popular keyboard concertos by Johann Sebastian Bach and his sons Carl Philipp Emanuel and Johann Christian Bach. Originally written for harpsichord, they are played on a modern piano on this recording.

Anastasia Injushina, prize winner of the ARD competition in Munich, has performed internationally and has made numerous recordings for radio and television. She has also performed chamber music with some of the world’s top musicians. In 2009 she became Artistic Director of the “Springlight Chamber Music Festival” in Helsinki.

The Hamburger Camerata is known for its wide-ranging and sophisticated output, its commitment to the Classical repertoire and to contemporary music.

Ralf Gothóni has appeared at the world’s most distinguished music festivals and with prominent European and American orchestras both as pianist and conductor.

the Hamburg Camerata string are in sparkling form. Anastasia Injushina's articulation is admirably versatile, though ornaments tend to accent, rather than simply decorate, the slow movement's beautifully languid line...Injushina captures the elegance of fluid scales and pert ornaments.

This music is an apt vehicle for Anastasia Injushina's limpid pianistic facility and taste, but the touches of individuality in the writing and in the work's significance in the development of the keyboard concerto are outweighed by reams of stock, note-spinning gestures.

This is extremely intelligent, thoughtful, committed playing that displays both a grasp of recent trends in performance practice and a deep love of the music. Of all the pianists seeking to make a case for music of this vintage on the mdoern instrument, I can't think of one who succeeds more eloquently than Injushina.