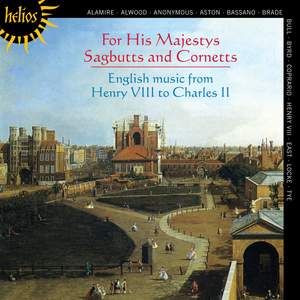 Tye: In nomine 'Farewell my good I. forever'

Jerome Bassano: Fantasia a 5 No 3

East, M: When David Heard that Absalon was Slain

Locke: Voluntary in A minor

In the early sixteenth century the playing of wind instruments was traditionally the domain of German and Flemish musicians, but when a storm forced King Philip the Fair to put ashore in England, along with his considerable musical retinue, Henry VIII was inspired to expand The King’s Musick. By the end of the century, the situation was reversed: England was the nation to which all others aspired and her players were to be found across Europe. The music on this recording comes from this glorious period of pageantry and national pride, and fully displays the enchanting sound and virtuosic scope of the cornett and sackbutt, remarkable instruments seldom heard today.