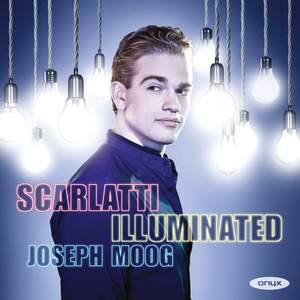 Gieseking: Chaconne on a theme by Scarlatti

A Scarlatti recital with a twist. Joseph Moog has assembled a fascinating survey of Scarlatti sonatas, and included a selection of the 18th-century master’s works as re-composed by some of the giants of the piano keyboard from the 19th and 20th centuries. The drama contained in Scarlatti’s short one-movement sonatas has always exerted a hold over both musicians and listeners since their composition.

The development of the piano in the 19th century provided too great a temptation for composer pianist Carl Tausig, a rival of Chopin and star pupil of Liszt (and admired by Brahms and Wagner) to ignore these works. He, along with Ignaz Friedman (1882–1948) exploited drama and poetry in Scarlatti’s music, using the new grand piano to its full extent.

Friedman was a pianist of extraordinary gifts, and a musical freedom that some thought bordered on the eccentric. Walter Gieseking’s fantastical composition on a theme by Scarlatti forms the centrepiece of Moog’s recital. Gieseking (1895–1956) was a child prodigy, playing all 32 Beethoven sonatas from memory at the age of 15: "The most difficult part was memorising them," he said, adding "and that wasn’t very difficult." Gieseking’s 'Chaconne on a theme by Scarlatti' is a stupendous work of dazzling virtuosity.

whether you consider Scarlatti 'illuminated' or obscured, you will surely delight at such enterprise and performance as finely shaded and imaginative as they are dexterous.

The Gieseking is the most interesting thing here...Moog’s essay suggests he deserves some credit for tracking down the various unconventional arrangements we hear. This may not be Horowitz but it’s very well worth any Scarlatti lover’s time.

Great pianists have often been fascinated by baroque music, and have sought to bring it up to date through transcriptions. Until now I had not heard such versions of Scarlatti sonatas, however, and their full-blown orchestral textures are quite a shock...Moog's bright, sharp pianism sounds better in the originals: the arrangements need more gentle, rounded warmth.

his [Moog's] well-balanced singing tone is always enchanting. It’s hard to find any faults with this Scarlatti cornucopia.