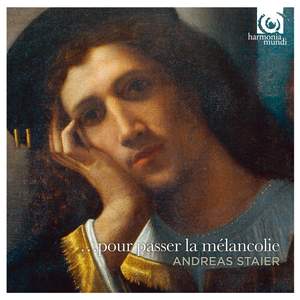 a satisfying issue on a fine-sounding and sympathetically recorded mid-18th-century harpsichord. — BBC Music Magazine, April 2013, 4 out of 5 stars More…

Whether the composer luxuriates in melancholic disorder or attempts to remedy it, there is but a fine line here between the vanity of the world and the artist’s glory. In his readings of Froberger, Fischer and Clérambault, Andreas Staier distils the fruits of this sophisticated blend on an instrument saved from oblivion at the start of the 21st century.

"‘Why have all eminent men, whether philosophers, statesmen, poets or artists, so obviously been melancholics?’ This question forms the opening of a treatise attributed to Aristotle. The doctrine of the four temperaments (sanguine, choleric, melancholic, phlegmatic) associates the melancholic with the most varied phenomena: the planet Saturn, the autumn (also in the sense of the autumn of life), twilight, cold, avarice, but also genius, geometry, and brooding profundity of thought. Albrecht Dürer condenses this multiplicity of motifs with extreme concentration in his celebrated and enigmatic engraving Melencolia I of 1514. ...I would like to thank Laurent Soumagnac for placing his wonderful harpsichord at my disposal for this disc, and Markus Fischinger for maintaining the instrument during the recording sessions. My very special gratitude goes to my friend and colleague Skip Sempé. He took the time for many inspiring conversations about French music of the seventeenth century." Andreas Staier

a satisfying issue on a fine-sounding and sympathetically recorded mid-18th-century harpsichord.

Staier's Froberger is played with a sure hand and a compelling sense of how to stretch the music's almost verbal rhetoric to the limits of what the musical line can bear...[his] sheer exuberance in rendering this deliciously absurd music is infectious. The instrument...has more than sufficient personality to bear up to the musical demands.

Staier surely comes close to an ideal synthesis of historical awareness and charisma … superb, both from a visual and audio perspective

It acts as a hypnotic, can’t-turn-your-ears-away culmination of all the albums themes... Not surprisingly, the production is superb. Staier plays with his usual authority and genius…there is so much outstanding music.

Much of this music sounds as if it were written centuries after its time, though it inhabits very different territory from late Romantic self-indulgence or modernist bravado. Staier plays it all with wonderful commitment on a newly restored late 17th-century harpsichord.