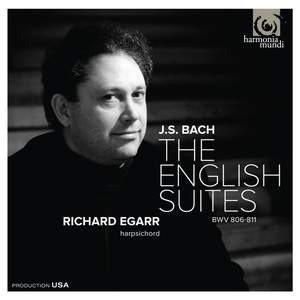 Egarr opens No. 1 like a lutenist improvising, flexing his fingers and checking his tuning, before embarking on a thoughtful stream of deliberate quavers...The dances are full of imaginative... — BBC Music Magazine, March 2013, 5 out of 5 stars More…

Whatever the elusive truth may be regarding the ‘Englishness' of these 'Six Suittes avec leurs Preludes', there is no denying the imagination of the keyboard writing. Each Suite is headed by a Prelude of substantial proportions, followed by wonderfully varied dance movements, all perfectly suited to showcase the joyful brilliance of Richard Egarr's harpsichord skill.

"as a player I find personally the most pleasure in the earlier keyboard collections. The Toccatas, Well-Tempered Clavier’s Book 1, Brandenburg 5 and the so-called ‘English’ Suites seem to delight in purely physical keyboard pleasure and imagination that is often absent from the later works...This is a true cycle of pieces – one of Bach’s first and certainly one of his best. The care with which Bach has planned their path, and the skill in creating a musical journey to a most fearful place is astonishing. The way to redemption and salvation after this journey is perhaps shown by the key sequence of the Suites: A – a – g – F – e – d. These six notes clearly describe the Chorale tune “Jesu, meine Freude”. I recorded the Suites in order. I certainly felt that it helped me make the musical path clearer. My trusty Katzman harpsichord was a glorious partner, its quill plectra wonderfully flexible and responsive in giving life and colour to this most imaginative music." Richard Egarr

Egarr opens No. 1 like a lutenist improvising, flexing his fingers and checking his tuning, before embarking on a thoughtful stream of deliberate quavers...The dances are full of imaginative touches...Egarr's ornaments have a delightfully improvised quality...Egarr displays an extraordinary tonal range, from harp-like resonance to transparency. The best harpsichord recital of these Suites on disc.

Egarr's tempi can be recommended as canonical to students of this music...as Egarr's traversal of all six suites unfolds, it becomes increasingly clear that his approach isn't about self denial or lack of ideas...for listeners struggling to find what they most admire in Egarr's playing in the somewhat muted earlier movements, the advice is simple: hold on, it will all make sense.

Egarr remains true here to the predominantly cantabile style of his previous Bach releases … he is an all the more eloquent guide for being a relatively unshowy one, his continuous supple rubato aptly realizing Bach’s harmonic twists without resort to undue histrionics. This is yet another fine release from one of the most consistently stimulating keyboard artists recording today.

Egarr’s imaginative interpretations of Bach’s English Suites, performed with rhythmic vigor and coloristic flair on the harpsichord, are entirely satisfying. Mr. Egarr vividly conveys the dance elements of each suite.

The Independent on Sunday 20th January 2013

the musical partnership is with the listener. From the elegant formality of the A major Suite to the quasi-orchestral flamboyance of the A minor, Egarr is good company. A remarkable cycle played with pungent physicality and generous wit.