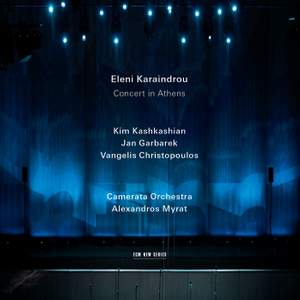 A beguiling concert by an all-star group performing some of Karaindrou's film and theatre-inspired scores, recorded with characteristic ECM warmth and clarity. — BBC Music Magazine, May 2013, 3 out of 5 stars More…

Karaindrou: Eternity and a Day

Karaindrou: Waltz Of The Rain

A beautiful and exceptional live recording, Concert in Athens, is the tenth ECM release by Greek composer of music for stage and screen, Eleni Karaindrou. With Eleni herself on piano and the Camerata Friends of Music Orchestra, it incorporates moving performances by guests Kim Kashkashian and Jan Garbarek.

The US violist and the Norwegian saxophonist have each made important contributions to Karaindrou’s music in the past, Garbarek with his playing on the film-score for The Beekeeper (recorded on Music for Films, 8476092) and Kashkashian as the key musical protagonist of Ulysses’ Gaze (4491532). Themes from both those films are revisited on this album, amongst much that is new.

A primary emphasis is music written for theatre: the wide-reaching emotional scope of pieces for plays by Arthur Miller, Tennessee Williams and Edward Albee provides a wonderful context for bringing the guest musicians into contact with Eleni’s soloists, above all the brilliant oboist Vangelis Christopoulos. Recorded November 2010, with Manfred Eicher as producer, Concert in Athens gives perhaps the fullest picture of Eleni Karaindrou’s outstanding compositional creativity to date.

A beguiling concert by an all-star group performing some of Karaindrou's film and theatre-inspired scores, recorded with characteristic ECM warmth and clarity.

There is no doubt about it; Eleni Karaindrou writes very good film/theatre music....We all need a bit of light music from time to time, and this is a high quality spot to get your fix. If you like your André Rieu and fancy exploring a little further afield then this if a fine place to go.

Themes from the films of Theo Angelopoulos are interleaved with music for Greek productions of plays by Williams, Miller and Albee, but while the orchestrations big-up the original scores, lushness is not what the spare, tense themes of Karaindrou are most treasured for.

Greece’s finest film and theatre composer also has some useful friends. Fabulous solos from saxophonist Jan Garbarek, viola player Kim Kashkashian and oboist Vangelis Christopoulos grace this concert of Eleni Karaindrou’s beguilingly atmospheric music. I like it best when it is mistily melancholic

There are marvellous things here. Karaindrou’s style is generally understated and subtle. Colours are muted, tempi tend to be restrained. Yet this music always moves, seems to be going somewhere and has something definite to say – there’s a welcome lack of ambient, moody blandness.