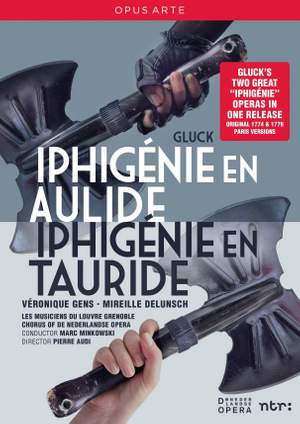 Two late and baleful tragedies by Euripides focus on the ill-starred daughter of the Greek King, Agamemnon. Will he sacrifice Iphigenia in order to secure fair winds for his voyage to Troy? In Aulis, the drama rages until she is spared. Having escaped to Tauris, Iphigenia finds herself compelled to kill her own brother before, once more, the fickle gods intervene.

Gluck's operatic settings are very rarely staged together, but Pierre Audi's production makes a darkly compelling case for their dramatic unity. All the lead performers here are experienced exponents of Gluck, and together they present a powerfully idiomatic experience.

First ever release together on DVD/Blu-ray.

Iphigénie en Aulide has never been issued before on DVD/Blu-ray.

[von Otter] presents a deeply sympathetic character...[Gens's] Iphigenia is equally touching and just as beautifully sung...one or two [production] oddities are far outweighed by the intensity that Pierre Audi secures from his team. Minkowski conducts superbly.

Some of the finest French Classical stylists around come together under the baton of Marc Minkowski on this double-bill of Gluck's two 'Iphigénie' operas...Anne Sofie von Otter is a magnetic Clytemnestre.