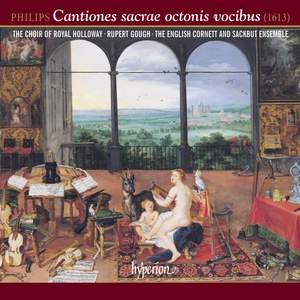 The Royal Holloway Choir is adept and musical and, at its best, can pull off splendid performances...The plainsong singing is measured and serene...the disc ends with a version of 'Hodie nobis'... — BBC Music Magazine, July 2013, 3 out of 5 stars More…

The Englishman Peter Philips spent most of his life abroad, and was celebrated all over Europe in his day. Despite this, Philips’s music has been neglected since his death in 1628—of his immense output of vocal music, to this day most people know only a handful of motets from the five-voice Cantiones sacrae (1612). The present recording of half of the companion volume of eight-voice motets seeks to remedy this situation.

These triumphant and highly Italianate settings are performed by The Choir of Royal Holloway, joined by The English Cornett and Sackbut Ensemble, who have gilded so many choral recordings of the music of Gabrieli and Monteverdi in the past.

The Royal Holloway Choir is adept and musical and, at its best, can pull off splendid performances...The plainsong singing is measured and serene...the disc ends with a version of 'Hodie nobis' that is full of panache.

The Choir of Royal Holloway is a fine one on this showing, its sopranos sounding rather boyish and agile, the overall sound full and well balanced but not overpowering...the English Cornett and Sackbut Ensemble do a fine job, ornamenting their lines judiciously without upstaging the singers.

The first impression is one of great spaciousness and breadth...Throught the disc it is the sumptuousness of the sound and, especially, the vivid contrasts between the intimate and the grandly expansive which lodge most firmly in the consciousness...this disc makes a substantial addition to the discography of Philips's music

what Rupert Gough has done with the choral spacings and instrumental participation - they are often central in the stereo image - works well. The words have clarity and the voices are crystal clear, the soloists are vocally pure and there is never a blemish in intonation.