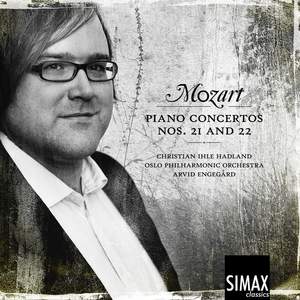 There is grace and delicacy aplenty in the Allegros, with a delightful sense of collusion between Hadland and the excellent Oslo woodwind...For my taste - and it does boil down to taste - he... — Gramophone Magazine, April 2013 More…

Norway’s fast-rising star pianist, Christian Ihle Hadland - now a BBC Radio 3 New Generation Artist - makes his debut concerto recording with a disc of two Mozart Piano Concertos, Nos. 21 and 22, performed with the Oslo Philharmonic Orchestra conducted by Arvid Engegård. Among the many striking features of this much-anticipated release is Hadland’s choice of cadenzas that Benjamin Britten wrote for Sviatoslav Richter in 1966 for the E-flat concerto, K482.

Christian Ihle Hadland is widely recognised as one of Norway’s most exciting young piano talents. He made his debut with the Norwegian Radio Orchestra and conductor Eivind Aadland at the age of 15, and has since gone on to perform with all of Norway’s leading orchestras, including several appearances with the Oslo Philharmonic Orchestra. In 2006 he was invited to accompany Renée Fleming at the annual Nobel Peace Prize Concert in Oslo which was televised to a global audience of many millions. In 2010 Christian was appointed joint Artistic Director of the Stavanger Chamber Music Festival alongside clarinettist Martin Fröst and he will be opening the 2011-12 season at the Oslo Philharmonic performing Chopin with conductor Jukka-Pekka Saraste. His debut solo album in April 2010 for Simax Classics of works by Chopin and Schumann (PSC1307) attracted great interest and received excellent reviews.

There is grace and delicacy aplenty in the Allegros, with a delightful sense of collusion between Hadland and the excellent Oslo woodwind...For my taste - and it does boil down to taste - he rather underestimates the grandeur of both opening movements...That said, pleasure in Hadland's performances far outweighs any provisos. Nothing he does is routine, and he always understands the essential vocal nature of Mozart's inspiration.