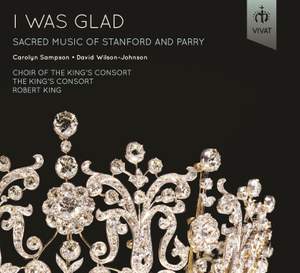 I was glad: Sacred Music by Stanford & Parry

a revelation. In the opening Magnificat and Nunc dimittis in A by Stanford, the leanness of gut strings lends edge and urgency to the orchestral writing, which perfectly complements the punchy... — BBC Music Magazine, April 2013, 5 out of 5 stars More…

Parry: Jerusalem "And Did Those Feet in Ancient Time" (Orch. E. Elgar)

Recording of the Week,  I was glad: Sacred Music by Stanford & Parry

Robert King and his Consort present lavish orchestrations (on period instruments) of Parry’s Te Deum, I was glad, Blest Pair of Sirens and Jerusalem, and four of Stanford’s canticle settings, with Carolyn Sampson and David Wilson-Johnson as soloists.

The King’s Consort celebrate their hundredth CD and the launch of their new classical label, VIVAT, with TKC’s largest recording in 15 years.

First recordings on period instruments, including the four great Stanford canticle settings, heard in the composer’s lavish orchestrations (Stanford in G with radiant singing from Carolyn Sampson), Parry’s I was glad (restoring a long-missing section for the 1911 coronation), a magisterial performance of Blest pair of Sirens, the 1911 Coronation Te Deum and a stunning Jerusalem in Elgar’s vivid orchestration.

The first of a series of releases on TKC’s new VIVAT label.

a revelation. In the opening Magnificat and Nunc dimittis in A by Stanford, the leanness of gut strings lends edge and urgency to the orchestral writing, which perfectly complements the punchy attack of the three dozen choral singers. There's not a trace here of Victorian self-satisfaction or stuffiness...This CD, full of incandescent, hugely committed music-making, will be an award-winner. You simply have to hear it.

for me this is a simple “must have”. An excellent recording as well.

[I was glad] is given a performance in the atmosphere of a church rather than a cathedral but is no less dramatic in its vivid trumpet calls. Blest Pair of Sirens, Parry's other well-known motet, comes with biting attack.

the composer’s own rarely-performed orchestrations blaze forth in all their glory, with an extra frisson provided by the use of instruments from the turn of the century...If you’re looking for definitive performances of the Parry or if you’ve always wanted to hear Stanford’s little gems in glorious technicolour then do give this a try!

vividly sung. The seraphic strains of Stanford in G are a welcome relief after the distinctly earthly thunder of Parry’s I Was Glad

it's splendid to have these recreations...clothed in their full orchestral colours with magnificent period brass...While the King's Consort Choir is not wholly cathedral-like, it's Elgar's version of Parry's Jerusalem, ending the disc in an unusually broad and eloquent performance from Robert King, that really hits home.

For the launch CD of its new label Vivat, The King’s Consort have delivered an undisputed spectacular...Suddenly, Stanford’s numerous Evening Canticles are heard to their full effect – radiant, Brahmsian exultations of faith, with unmistakable hints of Wagner witnessed in the thrill of the orchestral language...It’s a magnificent start for a potentially exciting new label.

Using period instruments and a medium-sized professional choir pays huge dividends, and it’s as if layers of dirty brown varnish have been stripped away from these scores. Parry’s music emerges as the strongest, and I was glad is resplendent here...This is an impressive disc, well annotated and superbly recorded.