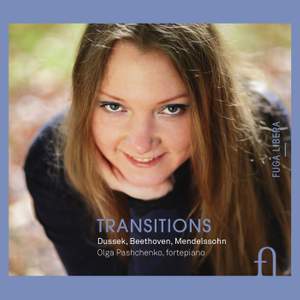 Pashchenko’s playing in the Dussek is imaginative and haunting, Mendelssohn’s variations offer the chance to show her playing at its most accomplished and she has the measure of the Beethoven... — MusicWeb International, 6th May 2013 More…

IV. Andante in A Major

This first album of the Russian pianist, harpsichordist and organist Olga Pashchenko – student of Alexei Lubimov and Richard Egarr; prizewinner of several international music competitions (‘Schloss Kremsegg’ for fortepiano in 2011; ‘Hans von Bulow' for piano in 2012…) depicts the rebellious and yet very tender metamorphosis between two ‘states’ of art – Classical and Romantic. Dussek, Beethoven, and Mendelssohn stand at the crossroads of the two styles; demonstrating how the transformation to Romanticism was subtle and hidden in the smallest details of the well-composed, transparent architecture of the music of the Classical period.

The two original instruments (Conrad Graf 1826 & Donat Schoeffstoss 1812) chosen with care by Olga Pashchenko are in possession of a great clarity of sound, and uncover immense timbral possibilities, allowing one to play with the rhetoric as much as with the colours.

Pashchenko’s playing in the Dussek is imaginative and haunting, Mendelssohn’s variations offer the chance to show her playing at its most accomplished and she has the measure of the Beethoven bagatelles...With excellent sound and truly superb booklet notes that address the album concept, the composers and the pianos themselves, this is a very strong entry. An album I’ll treasure.