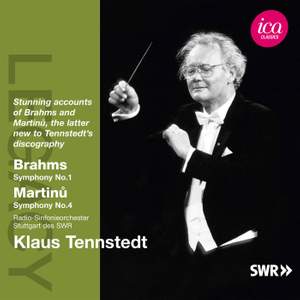 The 1976 performance [of the Brahms]...has its share of rough playing (the orchestra is no LPO) but as compensation the emotional temperature is higher than in any other Tennstedt recording of... — BBC Music Magazine, May 2013, 4 out of 5 stars More…

These two performances featuring Klaus Tennstedt (1926–1998) and the Stuttgart RSO were separated by only forty-one months, and yet Tennstedt’s life changed dramatically during this short period. In 1971 he escaped from the German Democratic Republic and by 1973 he had settled at the small opera house in Kiel.

But by spring 1974, he had appeared in North America with the Toronto Symphony and by December of the same year, he conducted the Boston Symphony in an all-Brahms programme. By 1976, he was established in both Europe and in the United States as a master of the core Austro-German repertoire.

The Martinu° Symphony No.4 typifies Tennstedt’s interest in more obscure repertoire during his early period in Germany. It is given a highly charged performance in this 1973 ‘live’ studio recording.

The Martinu° is a new addition to Tennstedt’s discography. It also highlights the work of this lesser known but very important composer (a set of the complete Martinu° Symphonies won a Gramophone Award in the Orchestral category in 2012).

The live 1976 concert performance from Göppingen of Brahms’s Symphony No.1 demonstrates Tennstedt’s great affinity with this symphony in a dramatic and urgent reading. It is far superior to his studio account made in 1983.

This recording marks a new and exciting relationship between ICA Classics and the SWR in Stuttgart. This is the first release of this material outside Japan.

The 1976 performance [of the Brahms]...has its share of rough playing (the orchestra is no LPO) but as compensation the emotional temperature is higher than in any other Tennstedt recording of this work - the music sweeps along irresistably without undercutting the conductor's fundamentally broad and weighty approach.

The Brahmsian bloom is there, the euphonious blend, and there's even an old-fashioned ritardando at the climax of the first movement...The gains are in the intimacy of a smaller group, not least in the slow movement...and there is undeniable immediacy and bite to the main Allegro of the finale...Tennstedt collectors will want it.

Overall, this performance of Martinů’s is an impressive achievement...This is a terrific reading of the Brahms symphony and whilst I remain a strong admirer of the two later live readings I’m very glad indeed to have this somewhat different and more urgent interpretation in my Tennstedt collection.