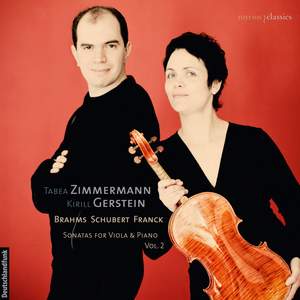 These first-rate chamber musicians play these three late works with a rare sensitivity of understanding and delicacy of nuance. — BBC Music Magazine, May 2013, 5 out of 5 stars More…

Tabea Zimmermann and Kirill Gerstein return to the studio to record the follow-up to their highly praised first duo album. The new disc includes spellbinding performances of three late works by significant 19th century composers: Brahms mature Sonata in F minor, Schubert‘s melancholic Arpeggione sonata, and Franck‘s splendid Sonata in A major, all masterly performed on viola. This new disc explores three works by major 19th-Century figures, each written during the composers’ final years. All three works on the new recording were originally composed for an instrument other than viola.

One of Brahms’ final chamber works, the dramatic Sonata in F minor, was intended for clarinet, though Brahms himself adapted the work to the range and technical possibilities of the viola. Also near the end of his life was Franz Schubert when he wrote his superb 'Arpeggione' sonata. The work was commissioned by a friend of the composer’s, who requested a sonata for a new kind of instrument: the arpeggione, a hybrid between the cello and the guitar. Written just four years before his death, César Franck’s A major sonata is also beloved by cellists but has been rarely heard from violists.

Tabea Zimmermann is one of the leading contemporary viola players worldwide. Awarded the Echo Klassik as Instrumentalist of the Year in 2010, Zimmermann has recently been Artist in Residence at the Cologne and Luxemburg Philharmony, as well as the Kunstfest Weimar, Bozar Festival Brussels and the Elbphilharmonie Konzerte in Hamburg. Of her recent disc of Bach and Reger solo suites, Gramophone wrote: “here is playing full of warmth, of depth, of meditation and of full maturity … gorgeous.”

Russian pianist Kirill Gerstein has quickly proven to be one of today’s most intriguing young musicians. Recipient of the 2010 Gilmore Artist Award, Gerstein’s solo release on myrios classics, featuring music by Schumann and Liszt, was played, according to The New York Times, “with exquisite technique, refined musicianship and engrossing imagination”, and was shortlisted by the NY Times’ Holiday Gift Guide as one of the 25 best classical recordings of 2010. This SACD release from myrios classics is available from harmonia mundi UK on January 14, 2013, as is the back catalogue.

These first-rate chamber musicians play these three late works with a rare sensitivity of understanding and delicacy of nuance.

It is understandable that Tabea Zimmermann should be completely at home recording these works on the viola, for each one has something special to say on this instrument...if playing the opening [of the Franck] on the viola softens its character, once Zimmermann and Gerstein get going, all its passionate impulse is fully revealed.

The lyricism of Schubert's Arpeggione (for the six-stringed, cello-like instrument) and the melodic generosity of the Franck (originally for violin) gain new vigour in these fiery performances.

Zimmermann sticks to his version and makes it work memorably… she mostly eschews any attention-grabbing portamento, and her tone acquires at moments an appropriate reediness… this lovely performance is imbued with that untranslatable Viennese quality, gemutlichkeit…excellent recording