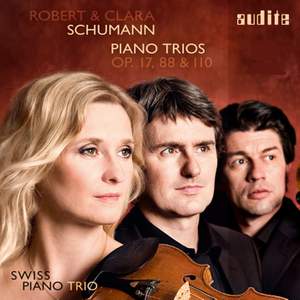 The Swiss Piano Trio’s bold opening sets the scene for a highly charged account … the players’ technical excellence emcompasses a tonal weight without ever compromising the required inner transparency…The... — The Strad, March 2013 More…

Juxtaposing these works reveals the differences, but principally the similarities, of the musical idioms of Mr and Mrs Schumann. Clara’s trio, composed in 1846, is an outstanding romantic work able to hold its own in the company of her husband’s or Mendelssohn’s trios. Whilst her work achieved public success but fell victim to the composer’s harsh self-criticism, the reverse was true of Schumann’s final trio, written in Düsseldorf in 1851. The unjustified verdict that this work no longer possessed the originality and mental power of Schumann’s earlier works but already revealed the composer’s looming illness, was responsible for this masterpiece of chamber music literature remaining unrecognised for a long period of time.