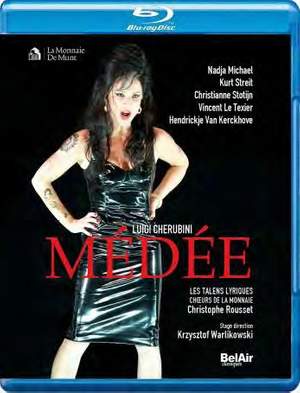 Written in 1797, Cherubini's faithful version of Euripides' ancient tragedy is one of the most savage and powerful works of the opera repertoire, relating the cruel vengeance of a wounded woman for whom infanticide seems to be the only solution to her humiliation in love. As a continuation of Gluck's music, Cherubini's work is of boundless emotion, at once a refined, terrifying and desperate portent of a tragic outcome.

Three years after the creation of 'Médée', Krzysztof Warlikowski and Christophe Rousset were reunited at La Monnaie for this memorable production. The spoken dialogue, has been modernised here in the Polish stage director's interpretation: dialogues being rewritten in contemporary French and with contemporary candour. Warlikowski reconstructs Médée as a contemporary, postmodern patchwork in which the 18th century musical numbers are just one element among others in a nearly-new work. As usual with Warlikowski, there are videos: 50s and 60s home videos of happy marriages, happy families, happy schoolkids accompanied by pop songs of the period – Oh Carol, (I am but a fool) being an example. The chorus are the period bourgeoisie, in superbly reproduced 60s costumes and hairstyles. Médée and Jason are strictly contemporary: she, at first as Amy Winehouse: the signature black hair, tattoos, eyeliner, black patent dress),he with long, heavy dreadlocks bunched down the back of his dinner jacket (and tattoos, once he is down to his vest).

The themes are marriage and separation, motherhood and children, the symbols are Médée as a dangerous, unconventional outsider (Amy Winehouse); as the Virgin Mary: as a weary modern mother folding her sons’ bloodstained pyjamas and putting them in a drawer at the end before, in absolute silence, walking off and slamming the metal door behind her.