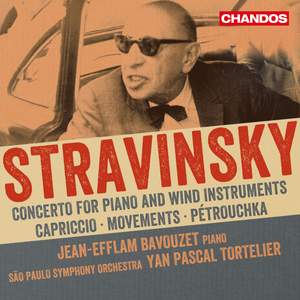 Stravinsky: Works for piano and orchestra

The Shrovetide Fair and the Death of Petrushka

Dance of the Gipsy Girls

Dance of the Coachmen and Ostlers

Police and the Juggler

After having won the Gramophone Award in 2014 for his recording of Prokofiev’s five piano concertos, exclusive Chandos artist Jean-Efflam Bavouzet here explores the complete works for piano and orchestra of another Russian composer of the twentieth century: Igor Stravinsky.

Furthermore, he has recorded all of them with Chandos. Last, but not least, his recordings of both Bartók’s (CHAN10610) and Ravel’s (CHSA5084) were shortlisted for Gramophone Awards in 2011 (‘Concerto’ category). The winner? The latter, which marked the first collaboration between Jean-Efflam Bavouzet and Yan Pascal Tortelier, one that is resumed on the present album.

It starts with the crisp games with rhythms, polyphony, and classical form of the expressive, weighty Concerto for Piano and Wind Orchestra. Then the Capriccio is a piece that Stravinsky composed as a repertoire alternative to his concerto; he performed it more than forty times in the first four years after its creation. The antitonal, twelve-tone idiom of Movements represents Stravinsky’s experiments in the use of serial techniques.

Pétrouchka is a work for piano and orchestra as well, except that the piano here is not a solo instrument but rather part of the orchestral fabric. Moreover, Bavouzet himself has described blending in with the fortissimos of the orchestra as ‘one of the best musical experiences of my life’.

[Bavouzet] captures the spirit of these disparate works...The São Paulo Symphony Orchestra under Yan Pascal Tortelier proves a remarkably deft partner, matching so that the numerous accents, twists and turns of the music occur as if the orchestra were an extension of Bavouzet's piano...there is much to admire and these pieces work well together.

Bavouzet is sprightly and concentrated in ‘Concerto’ and ‘Movements’, giving them a rhythmic lift.

From the moment [Jean-Efflam Bavouzet] bolts into the Concerto for Piano and Wind Instruments, you sense that his new recording of Stravinsky's three works for piano and orchestra is going to be a major addition to his discography. These are up-tempo performances, notable for their rapier accents, blazing colours [and] tightly sprung rhythms…the Sao Paulo orchestra, under Yan Pascal Tortelier responds dazzlingly.

Bavouzet, who won a 2014 Gramophone award for his Prokofiev concertos, brings energy and precision to this repertoire, whether in the serialism of Movements or the majestic, extrovert flair of Pétrouchka. It’s hard to imagine better.

There’s a bright shriek from the brass, and athletic clatter from the piano: Stravinsky’s 1924 concerto for piano and wind instruments is off and away. So is this scintillating new album from Jean-Efflam Bavouzet, the French pianist who always leaves the listener refreshed.

Best of all is the late 'Movements', which has never sounded less dry and more enticing. Superb recorded sound.