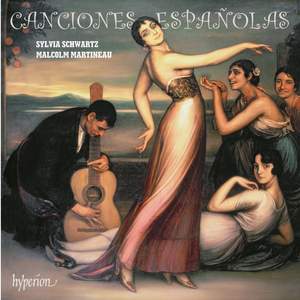 Hers is not a big, fruity Caballe voice but a soubrette - a voice small enough to convey subtlety without having to scale back but one that also encompasses the volatility of this repertoire... — Gramophone Magazine, March 2013 More…

A deeply seductive album of Spanish songs by composers including Granados and Turina, performed by the young Spanish soprano Sylvia Schwartz, whose commitment to this repertoire is described above, and is evident from her utterly enchanting performances.

A work from Granados’ Goyescas, perhaps more familiar in the piano version, opens the programme, which continues with Tonadillas en estilo antiguo, a set also inspired by the paintings of Goya and in which this soprano demonstrates her wonderful emotional and dramatic range. The folk-influenced set of songs by Guridi is a beautiful series of Castillan melodies, creatively transcribed by the composer with aplomb. The recital is completed by works by Turina, Toldrá and Montsalvage, including the latter’s universally popular ‘Canción de cuna para dormir a un negrito’.

Hers is not a big, fruity Caballe voice but a soubrette - a voice small enough to convey subtlety without having to scale back but one that also encompasses the volatility of this repertoire without audible strain.

This is a delightful programme of early twentieth-century Spanish song...[Martineau] proves to be an instinctive Spaniophile in his enchantingly nuanced accompaniments. He brings us as close as it is possible in a purely aural medium to the sights and scents of Spain...[Schwartz] delivers these songs with impressive precision and security. On a purely technical level, these are performances of the highest order.

There's a tangy, lived-in quality in Schwartz's tone that is immediately appealing. She compensates for some metallic top notes and an occasional lack of fullness in her lower registers with a wide emotional range

The Independent on Sunday 3rd March 2013

Sharpness and sweetness combine attractively in Sylvia Schwartz's voice.
The mixture is perfect for this programme of Spanish songs, some barely a minute long, all beautifully characterised by the soprano and her accompanist Malcolm Martineau