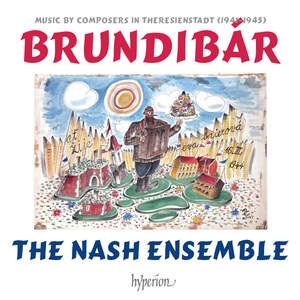 Both [the Ullmann and the Klein] are powerfully emotional works and they are performed here by the Nash Ensemble with passionate conviction and great attention to detail...The Nash Ensemble clearly... — BBC Music Magazine, May 2013, 4 out of 5 stars More…

Haas, P: String Quartet No 2 'From the Monkey Mountains', Op 7

III. The Moon and Me: Largo e misterioso

"The greatest musical experiences radically alter our perspectives. This was very much the case with The Nash Ensemble’s Theresienstadt weekend. Concerts, films, talks and exhibitions examined the extraordinary cultural flowering in the ghetto-camp near Prague, set up by the Nazis in 1941, where, among thousands of others, the Czech-Jewish intelligentsia were held before transportation to death camps. The event’s force lay in its broadening of our contextual awareness, and in its revelation of the quality of the work produced … many works were outright masterpieces … the Nash, an ensemble of stars, played with great technical power and depth of feeling … the Nash should tour this internationally—it deserves to be heard around the world. (The Guardian)

The Nash Ensemble presents a programme of works written at the transit camp Theresienstadt by four Jewish composers who went on to be killed at Auschwitz, their music forgotten. In recent years it has begun to be performed again and its extraordinary quality appreciated.

One of the most popular works was Hans Krása’s enchanting children’s opera Brundibár, performed fifty-five times at the camp and presented here as a suite arranged by the composer David Matthews. Viktor Ullmann, whose chamber opera The Emperor of Atlantis is now frequently performed, is represented by his String Quartet No 3, a lyrical, sumptuous work with a wistful quality, influenced by the Second Viennese School. Pavel Haas studied with Janácek and his vividly atmospheric String Quartet No 2, ‘From the Monkey Mountains’, shows the influence of his teacher, but also a definite musical personality.

Both [the Ullmann and the Klein] are powerfully emotional works and they are performed here by the Nash Ensemble with passionate conviction and great attention to detail...The Nash Ensemble clearly relishes [Brundibar's] light-heartedness and its moments of poignancy delivering a performance that is witty and thoroughly engaging...the Nash string players are especially in their element in the exciting Finale subtitled 'Wild Night'...an impressive achievement.

[the sound is] slightly clinical though crystal clear. This shows the Nash Ensemble's subtly nuanced performance in the best light

It's hard to separate any of this music from the life histories of the composers. But these sharply contrasting pieces, played with typical Nash polish and intelligence, show there was no shared Theresienstadt style – just a collection of promising creative careers never allowed to reach fulfilment.