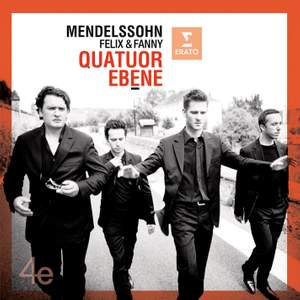 the Quatuor Ebène matches and in some respects exceeds [its] rivals in the commitment and physical impact of its playing...[and] employs the widest possible range of timbres and articulations... — BBC Music Magazine, April 2013, 5 out of 5 stars More…

Recording of the Week,  Mendelssohn from the Quatuor Ebène

The award-winning young French quartet bring their trademark commitment and passion to chamber-music by the Mendelssohn siblings, including Felix’s ‘quartet-Requiem’ for his beloved sister.

The Quatuor Ebène turns to Mendelssohn: two quartets by Felix and one by his elder sister Fanny, who composed over 400 works and who, like her brother, died in 1847. “Felix’s quartets speak with intimacy, but are not devoid of violent, stormy emotion,” says Raphaël Merlin of the Quatuor Ebène. He praises Fanny for composing “with surprising freedom”, saying “we fell in love with her string quartet”.

In a characteristically imaginative stroke of programming, the Quatuor Ebène presents a total of three quartets by two Mendelssohns – Felix and his older sister, Fanny.

Like Felix, Fanny was a highly gifted child, but, as a woman, her life took a different path from his. Felix remained close to her and solicited and respected her opinions on his music. She, meanwhile, produced a canon of well over 400 pieces – although only one string quartet; by contrast, Felix composed seven works in the genre, one of them a youthful work that carries no opus number. This disc features the A minor quartet he composed in 1827, very much under the influence of Beethoven, and the F minor quartet of 20 years later, a highly emotional piece, expressive of the grief he felt at Fanny’s death, aged 41, in May 1847. As it turned out, the quartet was to be the last major work he composed: he himself died in November of that year, at the age of just 38.

the Quatuor Ebène matches and in some respects exceeds [its] rivals in the commitment and physical impact of its playing...[and] employs the widest possible range of timbres and articulations in their use of non-vibrato particularly effective in the slow material that frames the entire work [Op. 13].

This disc abounds in the kid of full-on playing and lively engagement with the music that we've come to expect from Quatuor Ébène, caught up close and personal by the microphone...With every disc that the Ébène record, there's the unmistakable sense that they have something to say and an urgent need to say it. Not everyone will respond to their approach, but to my mind they're one of the most thrilling quartets around today.

The Quatuor Ebène play with the commitment and passion which they have become renowned for. Technical mastery is a given, whilst the spontaneity and homogeny of things like articulation and phrasing are remarkably consistent. The balance is excellent with solos in the inner parts just as characterised as those in the first violin.

[Fanny's] quartet, played with great conviction, is worth hearing — and even, formally and harmonically, more daring than Felix’s. These are nonetheless, superb works, his finest quartets. This passionate account of the A minor is touched, as though in anticipation, by the F minor’s darkness.

The Ebènes probe all three works with unflinching honesty and immediacy that don't make for easy listening, but are unforgettable.