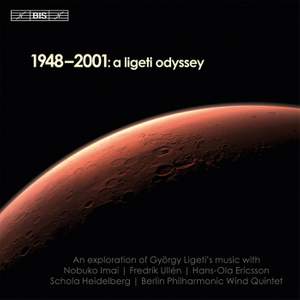 BIS present a chronological exploration of the music of György Ligeti.

The exploration begins with a brief piece for solo piano written when he was studying in Budapest and ends with his final compositions, also for solo piano.

The disc highlights a number of works which demonstrate the kaleidoscopic qualities of the composer – from the sense of humour displayed in the Six Bagatelles to the otherworldliness of Lux Aeterna (used by Stanley Kubrick in his film 2001 – A Space Odyssey), and the sheer mass of Volumina for organ.

The disc brings together some seminal Ligeti works in interpretations that were highly praised when originally released.