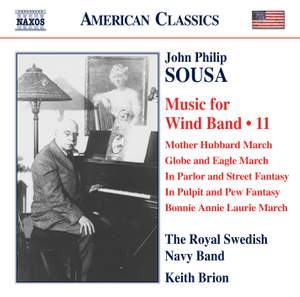 Sousa: You're the Flower of my Heart - Sweet Adeline Fantasy (arr. K. Brion for wind band)

John Philip Sousa’s compositions and the unprecedented international popularity of the Sousa Band helped establish the identity of a nation still culturally innocent and full of brash new energy. Sousa’s patriotism is represented in the Globe and Eagle March, the inspiring Keeping Step with the Union March and the setting of war verses for the We Are Coming March. Upbeat pieces such as the Tally Ho Overture contrast with the Sunday hymn fantasy In Pulpit and Pew, the fantasy In Parlour and Street, a medley of popular, operetta and operatic tunes, and a charmingly original version of Sousa’s favorite folk-song Bonnie Annie Laurie.