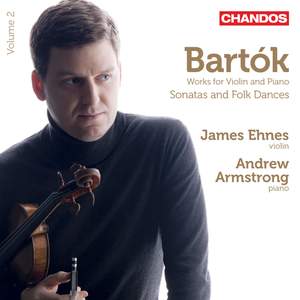 Needless to say, the score [of the Solo Sonata] holds no terrors for Ehnes who delivers a magisterial performance...Ehnes and his excellent pianist, Andrew Armstrong, make the best possible case... — BBC Music Magazine, March 2013, 5 out of 5 stars More…

Bartók: For Children, BB 53 (based on Hungarian folk tunes) (arr. J. Szigeti for violin and piano)

James Ehnes has previously explored Béla Bartók’s concertos for violin and for viola, to great acclaim. This disc is the second in his equally successful survey of Bartók’s chamber music for the violin. His accompanist, once more, is Andrew Armstrong, a pianist praised by critics for his passionate expression and dazzling technique.

The folk-inspired Sonata for Solo Violin was the last work that Bartók wrote for the instrument, not to mention the most challenging. In a departure from his usual practice, this work was written not for a fellow Hungarian, but rather for an artist born in New York where Bartók was now living: Yehudi Menuhin. Suitably impressed by a recital performance by Menuhin of his first Violin Sonata as well as Bach’s Sonata in C, he had no hesitation in accepting the violinist’s commission for a sonata that, like Bach’s, would be unaccompanied.

Almost half a century earlier, Bartók had written his Sonata for Violin and Piano in E minor. It was included in a concert given by graduating students of the Liszt Academy in June 1903, when a critic, most likely not realising just how right he would prove, hailed Bartók as ‘a phenomenal young genius, whose name today is known only to a few, but who is destined to play a great and brilliant role in the history of Hungarian music’.

Additionally on this disc we have three groups of Bartók’s Romanian and Hungarian folk dances, folksongs, and folk tunes, arranged for violin variously by Zoltán Székely, Tivadar Országh, and Joseph Szigeti, often with direct involvement by the composer himself who helped fine-tune the new arrangements. James Ehnes also highlights the Romanian influences in Bartók’s Sonatina for piano, transcribed for violin by André Gertler, a student of Bartók’s.

Needless to say, the score [of the Solo Sonata] holds no terrors for Ehnes who delivers a magisterial performance...Ehnes and his excellent pianist, Andrew Armstrong, make the best possible case for reappraising the early Violin Sonata of 1903, dismissed by the composer as a mere apprentice work.

Ehnes gives a stunning account of the Solo Sonata. The impression is that he's simply following all Bartok's meticulous direction...and adding nothing extra. If this seems boring, the effect is anything but: clarity of articulation, beauty of sound, the ease with which he surmounts the technical challenges, and deep understanding of the work's structure and character; all these combine to make a performance that's exciting and enthralling.

Big toned yet poetic, Ehnes is a persuasive interpreter.