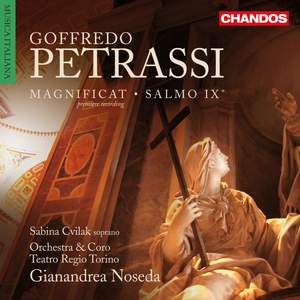 Orchestra and Chorus of the Teatro Regio, Torino, Gianandrea Noseda

[Cvilak] sounds sweet, warm and electrifying when required, and Noseda directs his Turin forces with authority and understanding of these powerful works. I hope Chandos will give us more Petrassi... — BBC Music Magazine, March 2013, More…

Part I: Et sperent in te

This recording forms part of our ongoing Italian series, fronted by the conductor Gianandrea Noseda. In the series so far, we have examined the music of many prominent Italian composers of the twentieth century, such as Respighi, Wolf-Ferrari, Casella, and Dallapiccola, as well as the great nineteenth-century master, Verdi. Noseda and his Italian forces here turn to the choral works of Goffredo Petrassi, an Italian composer who, despite being a relatively late bloomer, developed into one of Italy’s most significant composers of the mid- to late twentieth century.

In the English-speaking world, his contemporary Luigi Dallapiccola may be better known, but Petrassi was just as highly regarded in his home country. His music, inspired by Stravinsky and Hindemith, is dynamic and colourful, although perhaps emotionally reserved by the standards of his countrymen.

Petrassi’s talents showed themselves early. In 1913, aged nine, he became a chorister in the capital, where his encounter with Renaissance and baroque art and music left a lasting impression, one reflected later in several fine, large-scale choral works in which Petrassi combines polyphony with modern harmonies.

Here we have two such choral pieces: Psalm IX, in two parts, for chorus, string orchestra, brass, percussion, and two pianos, and the premiere recording of a Magnificat for soprano, chorus, and orchestra.

Both are performed by the Orchestra and Chorus, Teatro Regio, Torino under their Music Director, Gianandrea Noseda, for entirely idiomatic interpretations. Since he became an exclusive artist with Chandos in 2002, Noseda has recorded works by Prokofiev, Karłowicz, Dvořák, Smetana, Shostakovich, Liszt, Rachmaninoff, Mahler, and Bartók, as well as the Italian series discussed above.

[Cvilak] sounds sweet, warm and electrifying when required, and Noseda directs his Turin forces with authority and understanding of these powerful works. I hope Chandos will give us more Petrassi from this team

The performances by the forces of Teatro Regio, Turin, are committed and persuasive, though both works sound like they need a little more 'living with'. Soprano Sabina Cvilak is taxed at times by Petrassi's tough, high vocal lines but otherwise hers is a gutsy account.

[both works] are worth hearing, at times dramatic, and also very beautiful and sensitive...Noseda brings out the drama and strength of [Psalm IX] with much authority.