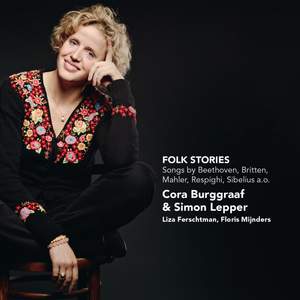 The essence of folk song is outward simplicity: this disc is a wide-ranging selection of arrangements and originals, performed with artful directness. — Sunday Times, 3rd February 2013

trad.: A Sprig of Thyme

Beethoven: The Return to Ulster

Beethoven: Come draw we round

On this Hybrid SACD recording ‘Folk Stories’, young multi-award winning mezzo-soprano Cora Burggraaf is joined by the pianist Simon Lepper, cellist Floris Mijnders, and highly-regarded violinist Liza Ferschtman. The disc features folk songs and arrangements by composers ranging from Beethoven, Brahms, and Mahler to some of the most important figures of the 20th century, including Britten, Bartók, and Sibelius.

The Dutch mezzo-soprano Cora Burggraaf graduated with distinction from the Royal Conservatoire in The Hague in 2002. She pursued her vocal studies in London at the Royal College of Music and the National Opera Studio. She has been the recipient of many prizes including the 2009/2010 ECHO Rising Star Award, the 2006 Elizabeth Everts Prize, the second prize in the International Vocalist Competition Den Bosch 2004, the 2003 Maggie Teyte Prize and the Miriam Licette Scholarship. Her studies in London were funded by the Dutch Fonds voor de Podiumkunsten and the Prins Bernhard Cultuurfonds. In opera, Burggraaf has appeared at the Salzburg Festival, the Royal Opera House in London (for which she was named “Most Promising Newcomer of the Year” by The Observer), San Francisco Opera, Welsh National Opera, The Netherlands Opera, Garsington Opera, Opéra de Bordeaux and at the Aix-en-Provence Festival, BBC Proms and the Gergiev Festival.

The essence of folk song is outward simplicity: this disc is a wide-ranging selection of arrangements and originals, performed with artful directness.