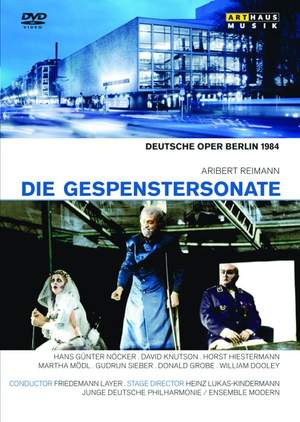 Set and Costumes by DIETRICH SCHORAS

In September 1984, as part of the Berlin Festival Week, the Deutsche Oper Berlin staged the world premiere of German composer Aribert Reimann’s opera “Die Gespenstersonate”. Based on the drama by the Swedish writer August Strindberg, the chamber opera tells the story of a student, who muses about the inhabitants of a fancy-looking house. His crucial meeting with the Old Man pulls him into a world of intrigues, sickness, depression and murder. It plays in and around the presumably haunted house, which seems to drown its inhabitants in its sinister atmosphere.

Better known for his operas “Lear” or “Medea”, Reimann established himself fi rmly as a stage composer from 1965 onwards. “Die Gespenstersonate”, being a modern chamber opera, was performed not on the great stage of the Deutsche Oper Berlin, but at the smaller Hebbel-Theater. Heinz Lukas-Kindermann’s stage direction sets the spectator under its gloomy spell, the exquisite cast performing the demanding score stars Hans Günter Nöcker as the Old Man and David Knutson as the Student, as well as well-loved Martha Mödl as the Mummy.