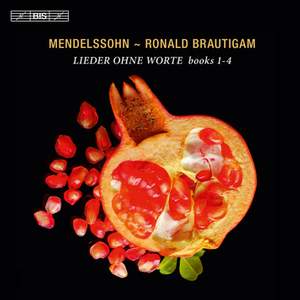 Initially I was not entirely convinced by the modern copy of an 1830 Pleyel...But soon I was relishing the clarity and sheer beauty of the sound and, for the most part, of Ronald Brautigam playing.... — BBC Music Magazine, March 2013, 4 out of 5 stars More…

Mendelssohn: Andante in A major, MWV U76

Andante in A major

Mendelssohn: Allegretto in A major, MWV U138

If claims could be made for a composer to have invented a genre single-handedly, Mendelssohn would be a strong candidate with his ‘Songs Without Words’ - short lyrical pieces for the piano using a song-like structure. They were immediately popular across Europe, and were imitated by several composers, including Robert Schumann.

One of today’s leading fortepiano players, Ronald Brautigam has released complete sets of piano music by Mozart and Haydn, and is currently recording a highly regarded series of the solo piano works by Beethoven.

Initially I was not entirely convinced by the modern copy of an 1830 Pleyel...But soon I was relishing the clarity and sheer beauty of the sound and, for the most part, of Ronald Brautigam playing. He is, without any doubt, one of the finest pianists around, and his despatch of Mendelssohn's fastest pieces is thrilling.

a rare opportunity to hear some of the composer's most beloved works as he might have heard them...There is, of course, much to savour and admire...but I miss the modern grand piano's sustained, singing tone

Ronald Brautigam’s Mendelssohn is so good it’s easy not to notice how good it is. That is, this playing feels so natural, so effortless, so perfectly songlike (cantabile!) that it’s tempting to think, “why wouldn’t the music sound like this?” ..This Mendelssohn breathes like a living thing...If you don’t think a fortepiano can sing, think again. A superb recital.