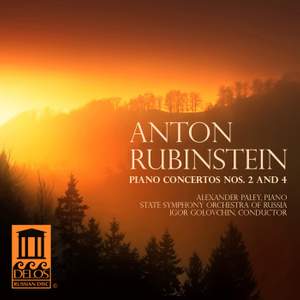 Anyone with a liking for the music of the great age of pianism will enjoy these works, especially as Alexander Paley, in a good if 20-year-old recording, has the virtuosity and also the essential... — Gramophone Magazine, May 2013 More…

The five piano concertos of Anton Rubinstein opened a new era in the history of Russian piano art, setting the stage for the great Russian concerto masterpieces to come – like those of Tchaikovsky and Rachmaninov. Several generations of Russian and foreign pianists were brought up on Rubinstein's concertos, especially the fourth. It was included in the repertoires of nearly all major pianists of the second half of the 19th and the beginning of the 20th centuries. But modern recordings of it (and its companion concertos) remain few and far between.

All the more reason to warmly welcome this Delos re-release of Russian Disk’s classic recording of Rubinstein’s second and fourth concertos, as performed by distinguished, Russian-trained artists. Brilliant Moldovian-American pianist Alexander Paley and conductor Igor Golovchin’s Russian State Symphony Orchestra (RSSO) have joined forces to produce glittering and idiomatically true accounts of both works. This is the third in Delos’ current series of Russian Disk re-releases of Rubinstein’s music; the other two are performances of Rubinstein’s “Ocean” (DRD 2010) and “Dramatic” (DRD 2012) symphonies, also by Golovchin and the RSSO.

Anyone with a liking for the music of the great age of pianism will enjoy these works, especially as Alexander Paley, in a good if 20-year-old recording, has the virtuosity and also the essential relish of them.

Paley’s control of the intense lyricism and dramatic virtuosity embedded in the [second] concerto’s romanticism is admirable...There is certainly plenty of expressive and reflective playing from Paley [in No. 4] but he sometimes takes this to excess