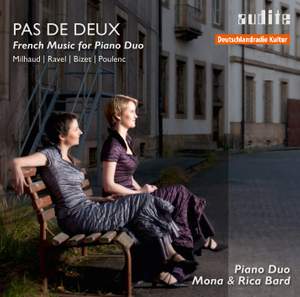 Really everything here is a delight. Scaramouche dances, tickles, burns manic energy, and in its slow movement is almost unbearably beautiful; the Bizet suite is as lively and colorful as any... — MusicWeb International, April 2013 More…

I. Prelude a la nuit

Winners of a number of awards, the sisters Mona and Rica Bard now present their first CD, a pas de deux though 80 years of French piano music. At one and at two instruments, they create a panorama of piano sound, ranging from the simulation of orchestral colours, percussive and motoric élan to the suggestion of an intensive song-like quality. With Bizet‘s Jeux d’enfants, Ravel‘s Rapsodie espagnole and Poulenc‘s Sonata for Two Pianos, this SACD contains three 'secret' masterworks by their respective composers. With its combination of elegance, irony and samba rhythms, the Scaramouche Suite quickly became Darius Milhaud‘s most popular work. Four hands, two sisters, one pulse – Mona & Rica Bard have won national and international awards at competitons; among them the German Music Competition, the Concorso Internazionale di Musica da Camera Palma d`Oro (Finale Ligure) and the Concorso Internazionale per Duo Pianistico Twenty Fingers (Rome). The Ensemble was accepted in the National Selection of Young Artists’ Concerts of the German Music Council and in the artists’ list of the association Yehudi Menuhin – Live Music Now. Extensive concert engagements have taken Mona & Rica Bard throughout Europe, to Asia the USA and to numerous festivals such as the Mecklenburg-Vorpommern Festival, the Schleswig-Holstein Music Festival, the NCPA May Festival Peking and the Chicago Piano Duo Festival.

Really everything here is a delight. Scaramouche dances, tickles, burns manic energy, and in its slow movement is almost unbearably beautiful; the Bizet suite is as lively and colorful as any orchestral reading...Sound quality is extremely fine, fuller and more resonant than some piano duo recordings can be, to my pleasure.