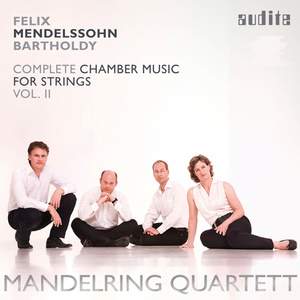 kindl[es] a sneaking suspicion that this will be a cycle to collect disc-by-disc and treasure as definitive once it's complete...There is a constant sense of their conviction here...the Mandelrings... — Gramophone Magazine, February 2013 More…

The second volume of 'Mendelssohn - Complete Chamber Music for Strings', four SACDs in total, is dedicated to compositions from the last third of the composer’s life. Felix Mendelssohn Bartholdy did not compose his six mature string quartets continuously, but at certain turning points in his musical life and biography. Whilst in his youth, the study of Bach and Beethoven was of major importance; later on his encounter with the exceptional violinist Ferdinand David inspired him, between 1837 and 1839, to compose his three Quartets Op. 44 (numbers 1 & 2 on this SACD). They document the mature, formally confident Mendelssohn summing up his instrumental oeuvre: virtuoso composition (especially for David’s violin playing), full of colours and formal stimuli, and of romantic attitude.

Just under a decade later, a completely different Mendelssohn appears in the territory of the string quartet, historically dominated by the mature works of Beethoven. Mendelssohn’s Quartet in F minor, Op. 80, seems to be more of an outcry than a cultivated piece of chamber music, triggered by the death of his beloved sister Fanny in May 1847. Mendelssohn, completely devastated by her death, almost lost the ability to compose but mastered the crisis by finding a new tonal language, raw and highly charged, hitherto unknown to him. Tragically, Mendelssohn could not develop this course, and one and a half months after completing his quartet, the 38-year-old suffered a deadly stroke at the beginning of November, 1847.

kindl[es] a sneaking suspicion that this will be a cycle to collect disc-by-disc and treasure as definitive once it's complete...There is a constant sense of their conviction here...the Mandelrings are consummately mature in how they keep [Mendelssohn's] ebullient, youthful emotion under control through the perfection of their tuning and modesty in their phrasing

The molto allegro vivace [of Op. 44 No. 1] begins like a pale echo of the great octet’s similar opening. The outstanding Mandelring Quartett, however, play both it and the E minor with the utmost conviction, and their account of Op 80 does justice to that harrowing expression of Mendelssohn’s despair at the death of his beloved sister Fanny.

A top German ensemble which has made acclaimed recordings of Shostakovich, Schubert and Brahms, the group is not yet well known here but should be. The players combine technical brilliance with beautifully controlled dynamic contrast and gleaming clarity