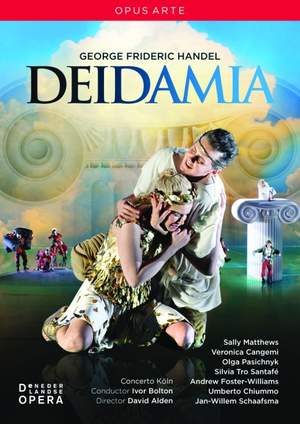 DNO presents a new production of Händel's last Italian opera, Deidamia, staged by the American David Alden. No known literary source has been linked directly to this opera, which is set at the time of the Trojan War. After an oracle has predicted the death of Achilles at Troy, Achilles disguises himself as a woman and takes refuge at the court of Lycomedes, whose daughter Deidamia falls in love with the young Greek. Amorous developments and tricks of disguise expose the truth and Achilles is forced to take his place at the side of his countrymen in the battle against the Trojans. Comedy and tragedy are bedfellows in this opera, and the title role in particular covers the entire expressive spectrum, from flirtatious love song to heartfelt lament.

Premiere of this opera on DVD & Blu-ray.

This latest release demonstrates the breadth of productions performed by De Nederlandse Opera.

Alden's approach is lightly ironic, matching well with a piece that treats its material with a knowing air...Ivor Bolton and Concerto Koln provide the expert musical underpinning. Sally Matthews shines as a vocally and physically poised Deidamia, Olga Pasichnyk emphasises the lusty young man hiding beneath Achille's skirts, and Silvia Tro Santafe's Ulisse presents him with a credible rival.

David Alden's jokey, modern-dress production is entertaining without quite persuading one that the opera's neglect is undeserved...Sally Matthews is perfect as Deidamia: saucy in 'Nasconde l'usignol', heartfelt in 'M'hai resa infelice'...Ivor Bolton conducts with passion: splendid sforzandos in another intense aria, 'Se il timore'.

the performance is magnificent. Sally [Matthews] encompasses all the aspects of Deidamia with ease and confidence...Olga Pasichnyk is a delightfully tomboyish Achilles...this is a production that will gladden the heart of any Handelian, who may well be unfamiliar with a score that deserves far more attention than it has hitherto received

David Alden’s splendid production of Deidamia is a joy. His witty update of Handel’s last opera captures its bitter-sweet blend of irony and heartbreak, and features a stellar performance from Sally Matthews, whose portrayal of Deidamia, as she passes from innocence to the disillusion and fury of ‘M’hai resa infelice’, is intensely moving.