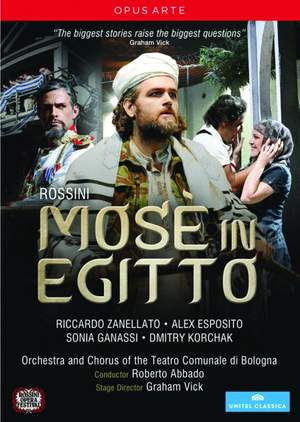 Vick and his designers use the space to the fullest...Roberto Abbado gives a well-proportioned reading, avoiding the temptation to turn the piece into early Verdi...Mancini's video direction... — International Record Review, December 2012 More…

This thought-provoking, modern-day interpretation of Rossini’s “Mosè in Egitto” sets the scene for superior music-making at the prestigious Rossini Festival in Pesaro. For conductor Roberto Abbado, the transposition of the action to the present day releases the energy of Rossini’s music. At his disposal is a cast of top-quality vocalists such as the “refined bel canto artist” (Bresciaoggi) Sonia Ganassi as Elcia, and the “outstanding” Dmitry Korchak as the Pharaoh’s son, two lovers fatefully drawn into the political turmoil and catastrophes of their time. Also among the protagonists are the “thoroughly brilliant” (DeutschlandRadio Kultur) baritone Alex Esposito as Faraone and, in his Rossini Festival debut, young, full-bodied bass Riccardo Zanellato as Moses. Conductor Roberto Abbado “inspired his musicians to deliver a spectacular performance” (Salzburger Nachrichten).

This is the premiere of the opera on DVD & Blu-ray.

Alex Esposito, who was recently acclaimed as Papageno in the La Scala production of Magic Flute, stars as Pharaoh.

Vick and his designers use the space to the fullest...Roberto Abbado gives a well-proportioned reading, avoiding the temptation to turn the piece into early Verdi...Mancini's video direction is excellent in this tricky assignment...Opus Arte includes a superb 'Making of...' featurette