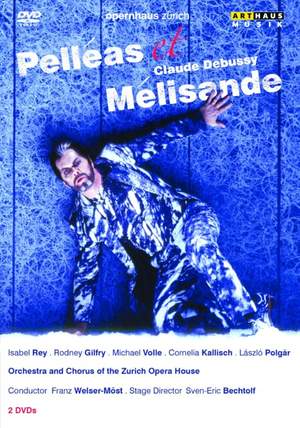 A staging of Claude Debussy’s only completed opera, Pelléas et Mélisande, recorded live at the Zurich Opera House. The opera’s premiere in Paris in 1902 brought the new century to the stage. It came quietly, introducing a new female figure that provided the visual artists of l’art nouveau with a fascinating alternative to such femmes fatales as Oscar Wilde’s Lulu and Frank Wedekind’s Salome.

Debussy (1862-1918) adapted a dreamlike libretto by the Belgian playwright and poet, Maurice Maeterlinck (1862-1949) and in the music retained the symbolic quality of the mysterious, almost static fairytale. Conductor Franz Welser-Möst and director Sven-Eric Bechtolf have become one of the leading partnerships in contemporary music theatre. The characters are impressively enacted by Rodney Gilfrey and Isabel Rey in the title roles.

Occasionally placed in wheelchairs that hint at emotional as well as physical inadequacies and frequently doubled by puppets, Debussy’s protagonists are kept at a distance in their subconscious dream world. Franz Welser-Möst conducts a performance that is clear, well structured, unsentimental and attuned to the alertness and pioneering spirit of a score that even today has lost none of its radiance. The designer Rolf Glittenberg set the work in a remote operatic universe that is both greyish white and ice cold.