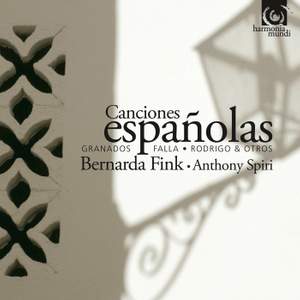 With her Slovenian (ie central European) parentage and Buenos Aires upbringing, Bernard Fink is ideally paced to dip one performing toe in each of the classical and linguistic/folkloric streams... — Gramophone Magazine, February 2013 More…

Written between 1902 and 1965, the canciones recorded here faithfully reflect both the evolution of Spanish art song in the 20th century and the attachment of its composers to France. Manuel de Falla’s famous Seven Spanish Folksongs are placed here alongside elegant little gems like the Three Spanish Songs and Four Sephardic Songs of Joaquín Rodrigo.

From the enchantments of Andalusia to the laments of León, this disc invites you on a journey through a Spain of dreams.

Born in Buenos Aires to Slovenian parents, Bernarda Fink studied at the Instituto Superior de Arte del Teatro Colón. She was recently heard in Mahler’s 'Resurrection' Symphony with the Berlin Philharmonic under the direction of Simon Rattle, works by Bach with Harnoncourt at the Vienna Musikverein and Mahler’s 'Kindertotenlieder' with the Nash Ensemble at the Wigmore Hall. She gives song recitals in the principal European and American musical centres and her recordings are regularly acclaimed by the international press.

With her Slovenian (ie central European) parentage and Buenos Aires upbringing, Bernard Fink is ideally paced to dip one performing toe in each of the classical and linguistic/folkloric streams of this music. Together with the pianism of Anthony Spiri - who clearly knows how to let his hair down...- she presents compelling versions of material which is not short of recorded competitors

Here she [Fink] presents 33 songs, sung as always with impeccable vocal control and absolute understanding and enunciation of text and expressive intent … these canciones espanolas form a collection that falls most pleasantly on the ear

Like de los Angeles and Berganza, Fink can adopt a variety of vocal “faces”, from ingénue to earthy, digging into her chest voice with an intensity that is both visceral and anguished. Fink is one of the song repertoire’s most complete polyglots...these performances are idiomatic and thrilling.

she does wonderful things with Granados's Tonadillas and with those expansive Rodrigo melodies in which Moorish and Sephardic influences are strong. But she's too ladylike, in places, for Falla and the demotic carnality of his Siete Canciones Populares Españolas sounds affected rather than natural.