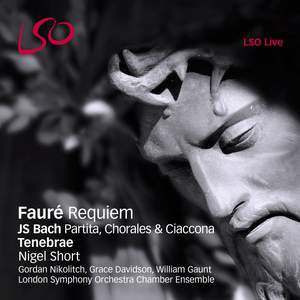 The playing of the London Symphony Orchestra Chamber Ensemble and their leader Gordon Nikolitch and the singing of Tenebrae and the two soloists are all exemplary. The problems here are not mostly... — BBC Music Magazine, February 2013, 3 out of 5 stars More…

LSO Live is delighted to renew its relationship with the magnificent Tenebrae choir, whose previous recordings on the label have included Berlioz’ 'L’enfance du Christ' and Handel’s 'Messiah'. As part of the 2011 City of London Festival, Tenebrae joined an ensemble from the LSO at St Paul’s Cathedral for a performance of the Fauré Requiem, preceded by a selection of Bach’s Chorales interspersed with Partitas performed by Gordan Nikolitch, leader of the LSO. The centrepiece of the programme was Helga Thoene’s remarkable arrangement of Bach’s choral themes with solo violin. The performance was restaged in May 2012 in the sublime acoustic of the Church of St Giles Cripplegate and recorded by LSO Live. The Fauré Requiem in D minor exists in three different versions, the John Rutter edition for chamber orchestra being performed here.

Following an Autumn tour of the USA, Tenebrae will perform a selection of Christmas concerts in December, followed by another tour of the USA in Spring 2013. Tenebrae sopranos will also feature in performances of 'Alice in Wonderland' at the Royal Opera House.

The playing of the London Symphony Orchestra Chamber Ensemble and their leader Gordon Nikolitch and the singing of Tenebrae and the two soloists are all exemplary. The problems here are not mostly of execution but, on two fronts, of conception...Nikolitch's performances of the four dances from the D minor Partita are riveting

the performance of the Faure Requiem is outstanding, and very well recorded…Tenebrae is such an impressive vocal ensemble, and they avoid all the pitfalls of the cool, clean, clear school of chamber choir – full-blooded, passionate engagement with the dots and the texts, and the soloists are excellent as well. I’m pretty sure it’s a combination you won’t find anywhere else on disc.

it is a performance of extreme richness and opulence. Short's marvellously moulded phrases, long-drawn and exquisitely shaped...are vital elements in elevating this performance to the sublime. Not to be downplayed, however, is the exquisite singing of Tenebrae...In short, this is a devastatingly beautiful performance.

This disc is a profoundly beautiful and supremely effective meditation on the theme of death and mourning...The singing of Tenebrae is marvellous here. Their blend is nothing short of sensational, and they fit the acoustic of St Giles’ Cripplegate as though it had been tailor made for them...perhaps the finest recorded performance of the Fauré Requiem I have come across...Short’s pacing of the work is masterful throughout

This remarkable, moving disc makes ingenious juxtapositions both vertically and horizontally...It is astonishing to hear the chaconne with the beautifully fitting chorale accompaniment Thoene has arranged.

[The Bach] doesn't quite work, and the sound is uneven, but the experiment is fascinating. Faure's Requiem, sensitively accompanied by the LSO Chamber Ensemble, is warmly performed, at once urgent and serene.