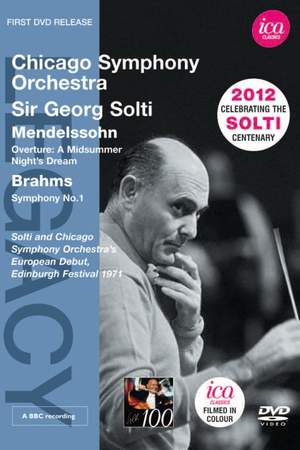 Not only is it a privilege to witness a seasoned outfit playing with such opulent tone, unbounded musicality and selfless application, the dynamic yet ever watchful Solti directs proceedings... — Gramophone Magazine, February 2013 More…

“Solti’s energy, bordering on the electric, provided the dynamic force necessary to galvanise an orchestra and a city into realising its rightful place as a stellar international centre of commerce, industry and art. That was Solti’s gift to Chicago” (Gramophone).

Taking up the post as director of the Chicago Symphony Orchestra in 1969, Solti remembered his early performances with the CSO as “an absolute joy” and would remain with them for 22 years, leading them in their debut European tour – of which the concert on this recording was the first fixture.

Recorded in 1971, the film on this DVD is taken from the CSO’s appearance at the Edinburgh Festival in the same year: their first ever concert outside America. In a first filmed edition of this performance, Solti conducts the orchestra in Mendelssohn’s Midsummer Night’s Dream Overture and Brahms’s Symphony No.1. His subsequent performances of the Brahms have been praised for their “dignity, energy and splendour”.

With his sometimes Samurai-like gestures, Solti summons tremendous power, elegance and clarity from the Orchestra, which includes such legendary instrumentalists as Dale Clevenger, Adolph ‘Bud’ Herseth and Frank Miller, and which led critic William Mann to write: “I am tempted to describe it as the United States” most completely accomplished orchestra’. Of his relationship with the CSO, Solti remarked: “It’s a marvellous thing to be musically happily married. I am, and I know.”

This is the first release of this material on DVD and is the first in a series of Solti/CSO releases to come from ICA Classics to celebrate Solti’s centenary.

Not only is it a privilege to witness a seasoned outfit playing with such opulent tone, unbounded musicality and selfless application, the dynamic yet ever watchful Solti directs proceedings with consummate grip, attentiveness and pleasing strength of personality. Above all, there's an irresistable sense of a conductor and orchestra both acutely mindful and deeply proud of their distinguished heritage.

Solti is an uncomfortable conductor to watch. His arm movements make him jerk puppet-like, he is continually whisking his players into a lather, his face often contorted into lop-sided grimace. There is however wonderful clarity and energy to fuel the pulse of the music. The overture is thrilling, the violins skate like water-boatmen through those pianissimo string passages, the wind players achieve impeccable ensemble thanks to the flautist’s subtle direction